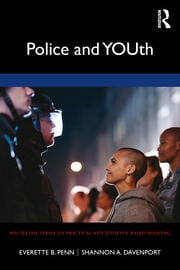 This book brings the knowledge gained from the Teen And Police Service Academy (TAPS), which has been implemented internationally to create partnerships with at-risk teens and police, proactively addressing some of the most pressing conditions in their communities.

Readers will learn about the nuances of both youth culture and police culture and will better understand the conflict stemming from race and social class. Straightforward solutions stemming from the President’s Task Force on 21st Century Policing are demonstrated to provide useful strategies for communities struggling with police–youth relations. This book is especially germane to Texas schools and law enforcement, which are to comply with Community Safety Education Act of Texas. It mandates instruction for all peace officers, high school seniors, those applying for their driver’s license and those required to take corrective driver instruction.

is ideal as a primer for students, instructors, police officers, and citizens who stand to benefit from improving police–youth relations. It provides the tools needed to educate all parties and ultimately improve relations between police and the communities they serve.

Chapter 3. Youth Is Never Wasted on the Young

Chapter 4. Responding to the Need: The President’s Task Force on 21st Century Policing

Chapter 8. Future: Building the Field of Study for Youth and Policing

Chapter 9. Resources to Reduce the Social Distance between Police and YOUth

Chapter 10. Resources to Reduce the Social Distance between Police and YOUth

Everette B. Penn, Ph.D. is the Director of the Teen And Police Service Academy and Professor of Criminology at the University of Houston- Clear Lake. This "academic-practitioner" applies theory to practice through programming, research, teaching and training to reduce the social distance between the most at-risk/at-promise youth and police in the United States and abroad. He is the author of over 75 scholarly works, a former Volunteer In Service to America (VISTA), Fulbright Scholar and U.S. Army Officer. He is a certified, Master Police Trainer, and the recipient of dozens of awards from governmental agencies, academic and civic organizations. More about Dr. Penn and TAPS Academy can be found at: www.tapsacademy.org.

(A.B.D.) is a doctoral candidate of Juvenile Justice at Prairie View A&M University. Her research interest includes police and youth relations, police legitimacy, emotional regulation, and at-risk youth. Combining research, teaching, and service, she volunteers with the Teen And Police Service Academy collecting and analyzing data. She is the author of several publications on topics including the "Me Too Movement" and "Social Distance Between Minority Youth and Police."

The police profession’s commitment to Community Policing has motivated me and other Police professionals to get out of our police stations and police cars and get into the community. Over 30 years I have spent endless hours meeting with business leaders, religious leaders, community activists and civic leaders with the hope of preventing crime and addressing neighborhood issues that impact their quality of life.

However, after seeing a number of police officers from my department indicted and disciple for mishandling young men that they came in contact with, I realized that there was a need to give the youth in my community a voice. This realization led to the development of the Teen and Police Services Academy (TAPS) so that the teens and the police could have an opportunity to learn from each other.

Therefore, I was not surprised when I saw the angry Black Lives Matter protesters’ demanding better police service, voice and transparency because during our many TAPS sessions over the years we have heard horrific police interaction stories from our youth that would explain why they feel, disrespected, frustrated and angry. As the co-founder of (TAPS) I encourage you to read Police and YOUth because involving youth in all of our Community Policing efforts will better prepare us for policing in the 21st Century. Additionally, this Police and YOUth will also give you the reader a greater insight into the world of policing as well as issues faced by our youth so that we can develop additional strategies and training like TAPS Academy that will lead to safer and better police and youth interactions.

The publication Police and YOUth comes at a time when the nation is being faced with the necessity of rethinking policing in the United States. Penn and Davenport provide a foundation for addressing the issue of Police and Community.

For the first time in our history, people and policymakers are acknowledging how law enforcement has ignored the crimes occurring against the LGBT community, the murders of transgender people and how the police have historically harassed and tormented members of the LGBT community. The numbers of Whites participating in demonstrations connected to the Black Lives Matter Movement is now outnumbering the African Americans. Instead of calls for reforms, greater accountability and more training, a significant segment of these movements are calling for defunding the police or at the least significantly decreasing funding and reallocating dollars to social services and housing. This book has shown that through programs like TAPS Academy we can expand our knowledge and improve relationships with the police.

How did we get to this moment in history and where do we go from here? Is there any hope for improving the relationship between youth, police and communities of color? Police and YOUTH address these issues and presents data on programs that have been found to significantly improve relationships with the police and young people. TAPS Academy for which, Dr. Penn directs addresses the next generation of youth that are approaching adolescence and seeks to find ways to improve the relationship between law enforcement and communities of color.

This book provides the reader with a firm foundation of the history of policing in American and the incendiary relationship that this institution has had with communities of color. For the first time in our history, people and policymakers are acknowledging how law enforcement has ignored the crimes occurring against People of Color by the police.

The author calls for a new discipline within Criminal Justice at Colleges and Universities. ‘Youth and Police Studies.’ The major focus would be on Juvenile and police relationships using information from the TAPS program as well as other programs that have proven successful. Currently, the only program offering a minor in Youth and Police Studies is the University of Houston at Clear Lake. The book lays the foundation for others to follow and build the field.

This is a great book and should be used not only as a text for Academics but should be required reading for every Police Officer and Trainee in the United States. The editor has included 10 take-aways for Police Departments as well as 10 take-aways for Citizens. Reducing social distance and increasing diversity are the two important take-aways for police and citizens. There are eight more take-aways for Citizens and Police. Each take-away is important to move police and citizens close together. This book will created discussions for years to come about the mission and ability to create stronger relationships between youth and police, especially those in communities of color.

Police and YOUth takes the reader on a journey through historic and recent examples of racial injustice which fueled the flames of anger, distrust, and calls for dismantling police authority. While the journey is difficult, the authors provide a promising path forward for stakeholders searching for positive change. This book is a must read for police and government officials seeking to understand the Black Live Matter Movement and how to begin to bridge the divide which threatens us all.