Policing and the Politics of Order-Making 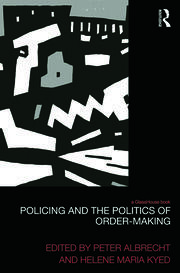 Policing and the Politics of Order-Making

This anthology explores the political nature of making order through policing activities in densely populated spaces across Africa, Asia and Latin America. Based on ethnographic research, the chapters analyze this complex with respect to marginalized young men in Haiti, community policing members and national politicians in Swaziland as well as other individual and collective actors engaged in policing and politics in Indonesia, Swaziland, Ghana, South Africa, Mexico, Bolivia, Haiti and Sierra Leone. What these contexts have in common is a plurality of order-making practices. Not one institution monopolizes the means of violence or a de facto sovereign position to do so. A number of interests are played out simultaneously, entailing re-negotiations over the very definition of what ‘order’ is. How and by whom a particular order is enforced is contested, at times violently so, and is therefore inherently political. In the existing literature on weak states, legal pluralism and policing in the Global South it is seldom made explicit that making order is a route to power and positions of political decision-making. It is this gap in the literature that this anthology fills, as it analyses the politics at stake in processes of order-making.

Peter Albrecht is a Project Researcher at the Danish Institute for International Studies.

is a Senior Researcher at the Danish Institute for International Studies.

'Policing and the Politics of Order-Making is a smart and engaging examination of urban insecurity and policing, across a broad range of geographical locations. Scholars from a variety of disciplines will be interested in these essays’ explorations of order – what it means, how it is made, by whom, and the ways in which it is contested by a range of social actors. A much-needed contribution to our understanding of order-making in contemporary cities around the world.'

‘This volume interrogates the policing of the world’s megacities. Combining innovative theory and empirically rich case studies, it explains how urban protection across the Americas, Africa and Asia comprises plural, overlapping policing actors of both state and citizens. The collection investigates the ways that people on the urban margins improvise their own protection amidst high crime rates, and how community policing emerges not simply as a reflex of neoliberal reforms but with its own history and politics. The case studies shed new light on youth-led civilian policing groups, how they operate in the ‘twilight’ between official sanction and covert racket, and how they are shaped by and produce their own political trajectories. This volume further complicates our understandings of global policing in a neoliberal age and is highly recommended.’

‘This is a timely and very welcome contribution to the ongoing exploration of the politics and practices of plural policing in the urban margins. The well written chapters convincingly show how hard-to-categorize policing actors in cities such as Manila, Cape Town, Accra, Port-o-Prince and Mexico City, engage in everyday order-making as well as overt politics, ambiguously manoeuvring the fine lines between legitimate and illegitimate use of violence.’

"It might be imagined that... challenges to the state's claim on the monopoly of security provision, ordermaking and the legitimate use of violence leads to constant conflict between the local groups and the authorities. However, the cases presented in Policing and the Politics of Order-Making demonstrate that the norm is a degree of liaison, if not co-operation, with the state police. Certainly, the very popularity and success of these groups evoke from the formal providers both resentment of their rivals and jealousy of the symbolic capital (prestige and attention) that they possess."