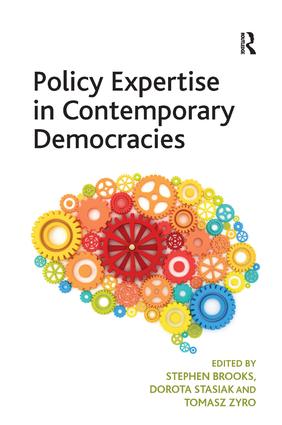 In the world of Wikipedia, blogging and citizen journalism where huge masses of information and the capability to disseminate opinions, thoughts and ideas is available at the click of a mouse what is the role and impact of political experts? The contributors to this insightful and original volume argue that across the western world in general, the political expert occupies as important a role today as at any time in the past. The ubiquity of information and the fact that the experts and the organizations to which they are affiliated may be viewed as having an ideological agenda has not diminished their role, influence or status. Governments and the media still rely on them for information and advice whilst organizations in civil society need them in order to provide the evidence, arguments and policy recommendations that are essential to having a voice in the public conversation. By examining how these policy experts and their think tanks continue to exert influence across a range of modern western democracies a better understanding of the role of policy expertise and an examination of how it may develop and evolve throughout the rest of the world is reached.

’Purveyors of policy advice, such as think tanks, are now being accorded the scholarly attention which has long been their due. Written from a variety of perspectives by a multinational cast of experts, this timely volume combines theoretical guidance with practical case-studies. Consolidating existing knowledge while suggesting topics for future research, it will be invaluable for all students of an increasingly-globalised policy-making process.’ Mark Garnett, Lancaster University, UK ’This book demonstrates that scholarship on the role of think tanks in policymaking is maturing beyond inventories and anecdotes toward richer theoretical perspectives and cross-national comparative analysis. Those who study think tanks or work in them - from researchers to student interns - will benefit from the many insights these authors provide.’ Christopher Sands, Hudson Institute, United States 'This book comes as a timely contribution in an age where experts’ credibility is often contested (but demanded) and elites are seen as ever more detached from the consequences of their actions. At the same time, politics becomes increasingly a matter of ’packaging’, thus fostering worrying tendencies for any informed public debate. It expounds and explores many of the deadlocks that plague modern policymaking… This volume, nonetheless, should be of particular interest to students, political scientist, policy experts and anybody attentive to the convoluted and rapidly changing relationship between political and epistemic authority. As Brooks reminds us, only in the 1970s technocracy was still considered an ideal. How quickly things change!' LSE Review of Books 'Policy Expertise in Contemporary Democracies is a compilation of profound essays on theoretical perspectives enriched by a number of national in-depth case studies and comparisons on policy expertise useful particularly for (post-)graduates, academic experts from multiple disciplinary backgrounds such as politic