Political Campaigns in the United States 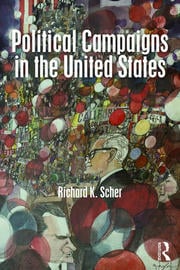 Political Campaigns in the United States

This book is an interpretive analysis of political campaigns in America: instead of focusing on how campaigns are designed and run, it investigates the role campaigns play in our American politics, and the close symbiosis between campaigns and those politics. The text examines how campaigns are an important manifestation of how we "do" politics in this country.

Hallmarks of this text include:

Richard King Scher is Professor of Political Science at the University of Florida, Gainesville.

"Prof. Richard Scher takes a deep dive into the campaigns that drive our politics, and he asks fundamental questions about the electioneering process. Students and readers of all stripes will find the book fascinating -- and good preparation for interpreting what candidates and the news media say and do each political season."

"As we strive to meet the permanent need to govern in a time of the permanent campaign, Professor Richard King Scher’s book provides important insights into the politics of campaigns."

"Richard King Scher does a superb job of demystifying the American political campaign process for the reader. He provides a comprehensive and keen analysis of modern politics and the prominent role that political consultants, media outlets, and big money play in campaigns and elections."

"Political Campaigns in the United States is an excellent introduction to how American political campaigns work and how they have evolved with the increased role money, media, and an expanded professionalized campaign industry. Scher argues that contemporary campaigns are undermining American democracy by turning them over to a campaign industry that is closely allied with 'big money' and corporate interests, thus undermining the role of everyday voters. He calls for reforms in campaigns, which will bring more transparency, accountability, fairness, and responsiveness which will bring back more vitality and trust in our democracy."