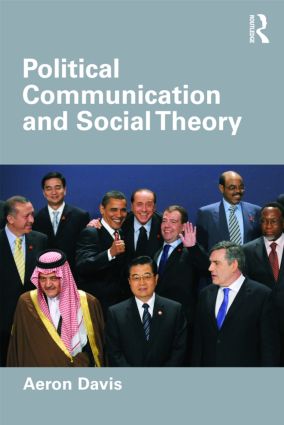 Political Communication and Social Theory presents an advanced and challenging text for students and scholars of political communication and mass media in democracies. It draws together work from across political communication, media sociology and political sociology, and includes a mix of theoretical debate and current examples from several democratic media systems. Its wide ranging discussions both introduce and contest the traditional scholarship on a number of contemporary topics and issues. These include:

At the same time, Political Communication and Social Theory also offers a fascinating investigation of the causes of crisis in established political and media systems. In today’s democracies, trust in politicians, state institutions and mainstream media sources has dropped to new lows. The traditional business model that sustained journalism is failing and nations are struggling to respond to the existing global recession and impending environmental and resource crises. Drawing on interviews with over 100 experienced politicians, journalists and civil servants, Aeron Davis explores how the varied political actors and communicative processes, at the centre of UK democracy, may or may not be contributing to such crisis tendencies.

"This is a slim volume but it packs a powerful punch, combining sociological and political theory, extensive fieldwork and anthropological observation." - Ivor Gaber, THE

"[Aeron Davis] had produced a first-class series of essays that should be at the top of any good political communications reading list" - Ivor Gaber, THE

"Aeron Davis’s book could hardly be more timely: it examines the delicate question of the links between democratic politics and media systems in the UK at a moment of great change in both. But it is more than timely: it sets the UK experience into a wider comparative and theoretical framework, and is consistently rigorous in its theoretical analysis and deployment of evidence. It will be invaluable not only to students and researchers, but to practitioners in the media and in the political system." - Michael Moran, Professor of Government, University of Manchester, UK

'… this book is a must read for those interested in both the theoretical aspects of political communication and the workings of UK politics. It will prove invaluable to scholars of the field and should be recommended reading for any who wish to consider reforming the processes of governance in democracies.' - British Politics

List of Tables and Figures Preface and Acknowledgements 1. In Search of the ‘Good’ Democracy: Comparing Political and Media Systems 2. Citizens, Political Representation and Parliamentary Public Spheres 3. Professionalised Parties, the Electoral Mechanism and the New Wave of Party Leaders: The Rise of David Cameron 4. The Production of Policy and News: Liquid Politics and the Working Cultures of the New Capitalism 5. Journalist-Source Relations, Mediated Reflexivity and the Politics of Politics 6. Celebrity Politics, Symbolic Communication and Media Capital in the Political Field 7. New Media and Fat Democracy: The Paradox of Online Participation 8. Politics and Communication Between the National and the Global: Determining the Boundaries and Significance of ‘International Political Communication’ 9. Foreign Policy-Making, War and the Disembedding of Cosmopolitan Elite Networks: The Case of Iraq 2003 10. The ‘Crisis’ of Politics and Communication in Ageing Democracies List of Interviewees Bibliography Index

Aeron Davis is a Reader and Director of the MA in Political Communication in the Department of Media and Communications, Goldsmiths College, London. He is the author of Public Relations Democracy (2002) and The Mediation of Power (2007).