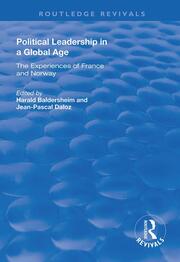 Political Leadership in a Global Age: The Experiences of France and Norway

Title first published in 2003. Responses to globalisation in politics and governance at national, regional and local levels of government in France and Norway are explored in this engaging study.

Jean-Pascal Daloz is a senior Centre Nationale de la Recherche Scientifique (CNRS) research fellow at the Bordeaux Institute for Political Studies (CERVL) and associate professor in the Department of Political Science at the University of Oslo. HARALD BALDERSHEIM is Professor of Political Science at the University of Oslo, Norway. He has published extensively on leadership and innovation in local and regional government. He has co-ordinated large-scale research programmes on processes of democratization in post-communist Europe and has also studied the spread of new communication technologies in Third World countries. He served as the chairperson of the standing research committee on local government in the International Association of Political Science.

'This book provides an excellent overview of leadership studies and a fascinating comparison of two European countries, both of which usually take pride in being called 'exceptional' or 'unique'. The argument, that globalisation has created new opportunities for leadership but that leadership responses are context-bound, is highly thought-provoking and is explored in a series of high-quality chapters written by experts in the area.' Professor Robert Elgie, Dublin City University, Ireland 'Put together and edited by two eminent scholars and experts on France and Norway, the book provides valuable insights to anybody interested in the impact which the forces of globalization and internationalization have on local government, governance and leadership as well as on the welfare state at large. The fascination (and novelty) of the book lie in the very selection of two countries which, at first sight, seem quite remote and different on many scores, but which, at closer inspection, reveal striking commonalities.' Professor Hellmut Wollmann, Humboldt-University, Germany 'This is a fascinating study of the impact of globalisation on two developed countries in Europe and the responses demanded of the political leadership at various levels of authority, local or municipal, national and regional.' USI Journal