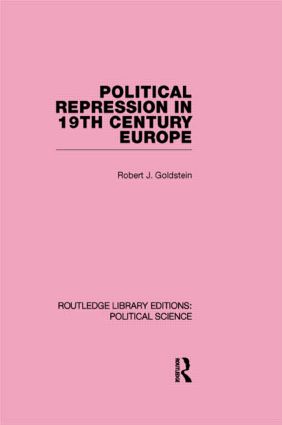 Originally published in 1983. The nineteenth century was a time of great economic, social and political change. As Europe modernized, previously ignorant and apathetic elements in the population began to demand political freedoms. There was pressure also for a freer press, for the rights of assembly and association. The apprehension of the existing elites manifested itself in an intensification of often brutal form of political repression. The first part of this book summarizes on a pan-European basis, the major techniques of repression such as the denial of popular franchise and press censorship. This is followed by a chronological survey of these techniques from 1815 – 1914 in each European country. The book analyzes the long and short-term importance of these events for European historical development in the 19th and 20th centuries.

'…an extraordinarily comprehensive and meticulous piece of research…. it ought to be required reading for anyone interested in human rights in the late twentieth century.' Rhoda E. Howard, Human Rights Quarterly

'…a formidable compendium of facts and figures…. synthesizing a range of modern scholarship and utilizing an impressive array of quotations and statistics… the book is a storehouse of compartive data.' J. S. Cockburn, Journal of Modern History, Vol 59, No. 3

'The virtue of Goldstein's analysis is that leaves the readers free to use the data to draw their own conclusions.' John A. Armstrong, American Historical Review

Routledge Library Editions: Political Science reprints a distinguished selection of important texts published in this field over the last century. This set presents a unique opportunity to gain comprehensive coverage of all aspects of the history, philosophy and theory of political science.