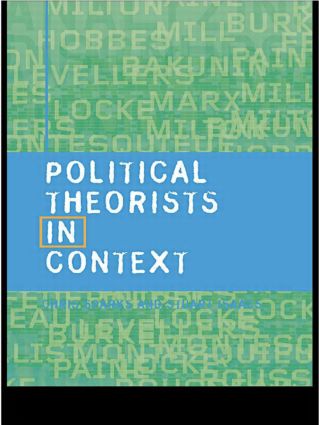 Focusing on the historical context in which political theorists have developed their thinking, this textbook provides an invaluable introduction to students of political thought. The authors address a series of canonical major thinkers in the context of three world-changing epochs: the English, French and Industrial revolutions. The theorists' ideas are assessed with reference to the politics of their time and show how they responded to, or interacted with, the political events and issues of their day.

'Sparks and Isaacs have boxes that invite the reader to 'fast forward' or 'rewind' to later or earlier pages, a valueable device for the video/DVD generation.' - The Times

'The four of these books that cover political theory/ideology in general do so in ways that are engaging and accessible and they contain devices to help students.'- The Times

Chris Sparks, whose previous titles include Montesquieu's Vision: Uncertainty and Modernity and Uncertainty and Identity: The Enlightenment and its Shadows, currently lectures in sociology and politics at the Institute of Technology, Sligo and is Visiting Research Associate at the Centre for the Study of Democracy, University of Westminster.

Stuart Isaacs, whose research interests include classical and contemporary political thought, is senior lecturer in social policy and sociology at London Metropolitan University.