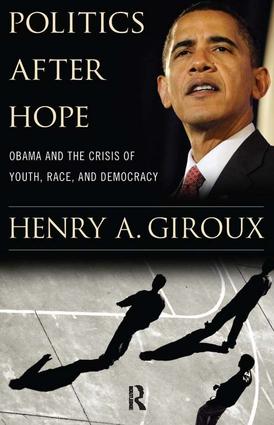 Obama and the Crisis of Youth, Race, and Democracy, 1st Edition

By Henry A. Giroux

As the new administration moved beyond its first year in office, Obama's politics of hope increasingly has been transformed into a politics of accommodation. To many of his supporters, his quest for pragmatism and realism has become a weakness rather than a strength. By focusing on those areas where Obama grounded his own sense of possibility, Giroux critically investigates the well-being and future of young people, including the necessity to overcome racial injustices, the importance of abiding by the promise of a democracy to come, and the indisputable value of education in democracy. Giroux shows why considerations provide the ethical and political foundations for enabling hope to live up to its promises, while making civic responsibility and education central to a movement that takes democracy seriously.

“. . . A call for academics and public figures to reclaim the idea that America is based on a social contract, and for the exchange of critical ideas through debate and dialogue. A wonderful read. Highly recommended.”

"Giroux may be our best champion of youth and here he paints a stark picture of the complicity between corporate greed and governmental abandonment that continues to leave our children vulnerable. In Politics After Hope, Giroux brings a nuanced but strong call for President Obama to live up to his rhetoric of hope and democracy and reminds the rest of us to hold the President to his promise. This may be Giroux's most accessible book, probably his most timely, and it's certainly his most powerful."

"Giroux's book reminds readers that while Obama has already become a captive of the Presidency as an institution in American politics, his campaign rhetoric had offered an opportunity to revisit the vigor of radical ideas and democracy as an ideal in contemporary America. Focusing upon the linkages among, youth, citizenship, education and social change, Giroux offers a rich array of analysis and ideas that could help to transcend the politics of failure that has increasingly defined American life since the 1960s."

"Henry A. Giroux has been tracking the war on youth and decline of education and democracy throughout the Bush-Cheney era. In Politics After Hope Giroux tracks out how problems of youth, race, education, militarism, and the decline of democracy are rooted in the previous era and provide serious challenges to the Obama administration. Grounding himself in Obama’s politics of hope, Giroux sees early problems and failures concerning Obama’s response to key issues and provides challenges for the Obama administration to match their rhetoric. A timely look at current political and pedagogical issues that should be of concern to educators and citizens alike."

-Douglas Kellner, UCLA, Author of Media Culture (1995) and Media Spectacle and the Crisis of Democracy (2005)