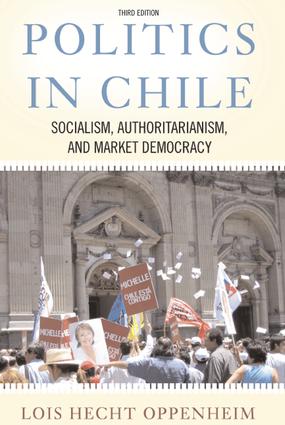 The third edition of Politics in Chile provides significantly updated coverage of Chilean politics and economic development from the return to civilian rule in 1990 to the 2006 election and early administration of Socialist Michelle Bachelet, Chile's first woman president. Lois Hecht Oppenheim focuses on recent efforts to reconstruct democratic practices and institutions, including resolving such sensitive and lingering issues as human-rights violations under Pinochet and civil-military relations. Chapters on the contemporary politics and economics under the civilian Concertaci governments are largely rewritten for this edition. Rather than focusing on the "search for development", the third edition considers in greater depth the "exceptionalism" of the Chilean economic experiment through successive stages of stability, socialism, and neoliberalism.

Preface to the Third Edition

1. An Overview of Chilean Politics

Part 2: Chile's Experiment in Socialism and the Collapse of Democracy, 1970-1973

2. The Popular Unity's Project: A Nonviolent Transition to Socialism

3. Overview of the Allende Years, 1970-1973: Major Issues and Political Dynamics

4. The System Collapses: Causes of the Military Coup

5. The Military in Power:Creating a New Chile

6. The Neoliberal Economic Model and Its Social and Political Consequences

7. Political Opposition to Military Rule and the Reawakening of Civil Society

Part 4: Continuities and Change in Post-Pinochet Chile: Market Democracy Under the Concertacion

8. Chile as an Economic "Jaguar": An Evaluation of Concertacion Economic Policy

Lois Hecht Oppenheim is Professor of Political science at the University of Judaism.