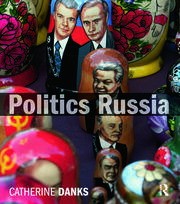 Politics Russia provides the most comprehensive, accessible and up-to-date introduction to all aspects of the political development of Russia in the post-communist era. Writing with the undergraduate student specifically in mind, Danks’ fluent style and masterly grasp of complex material will make this an indispensable guide for many years to come.

Divided into five sections, Politics Russia maps a clear path towards an understanding of Russia and its politics in the twenty first century. In Part One the emergence of contemporary Russia is put into context by a consideration of the end of the USSR and the move towards democratization under Gorbachev. Part Two provides a clear-sighted and stimulating overview of the nature of the executive and the legislature in contemporary Russia. Part Three examines civil society, the role of the media and the representative process.  Part Four is focussed on the policy process, from foreign and defence policies to the development of domestic social policies from the provision of healthcare to education. Part Five, the final, provides an overall consideration the contemporary state of Russia, examining the development from Yeltsin, to Putin to Medvedev, and considers the possible futures of the region.

The book is supported by a host of pedagogical features, including:

Chapter 1    Gorbachev, perestroika and the end of soviet socialism

Chapter 2 Explaining the end of the soviet socialism: the USSR and the Cold War

Chapter 4 Russia and the Russian peoples

Part Two    The executive and the legislature

Chapter 9 The State in Uniform: the Armed and Security Forces

Chapter 16 From Yeltsin and Putin to Medvedev