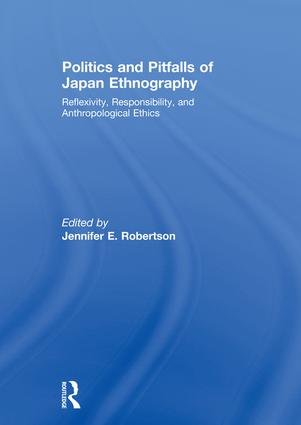 Politics and Pitfalls of Japan Ethnography

Four anthropologists, Elise Edwards, Ann Elise Lewallen, Bridget Love and Tomomi Yamaguchi, draw on their fieldwork experiences in Japan to demonstrate collectively the inadequacy of both the Code of Ethics developed by the American Anthropological Association (AAA) and the dictates of Institutional Review Boards (IRB) when dealing with messy human realities. The four candidly and critically explore the existential dilemmas they were forced to confront with respect to this inadequacy, for the AAA’s code and IRBs consider neither the vulnerability and powerlessness of ethnographers nor the wholly unethical (and even criminal) deportment of some informants. As Jennifer Robertson points out in her Introduction, whereas the AAA’s Code tends to perpetuate the stereotype of more advantaged fieldworkers studying less advantaged peoples, IRBs appear to protect their home institutions (from possible litigation) rather than living and breathing people whose lives are often ethically compromised irrespective of the presence of an ethnographer. In her commentary, Sabine Frühstück, who incurred ample experience with ethical dilemmas in the course of her pathbreaking ethnographic research on Japan’s Self-Defense Forces, situates the four articles in a broader theoretical context, and emphasizes the link between political engagement and ethnographic accuracy.

This book was previously published as a special issue of Critical Asian Studies.

2 Migrant Workers in the Pearl River Delta: Discourse and Narratives about Work as Sites of Struggle Eric Florence

3 The Paradox of the State-Run Media Promoting Poor Governance in China: Case Studies of a Party Newspaper and an Anticorruption Film Rachel Murphy

5 The Internet and the Fragmentation of Chinese Society Jens Damm

Jennifer Robertson is professor in the Department of Anthropology at the University of Michigan. The author of numerous articles, her books include, as editor, Same-Sex Cultures and Sexualities: An Anthropological Reader (Blackwell, 2004); and A Companion to the Anthropology of Japan (Blackwell, 2005). Robertson is the general editor of Colonialisms, a new book series from the University of California Press (www.ucpress.edu/books/COL.ser.html), and is presently completing a book on cultures of Japanese colonialism, eugenics, and humanoid robots.