Politics of Culture in Liberal Italy
From Unification to Fascism 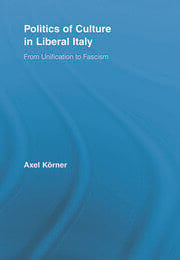 Politics of Culture in Liberal Italy: From Unification to Fascism

With chapters on theatre and opera, architecture and urban planning, the medieval revival and the rediscovery of the Etruscan and Roman past, The Politics of Culture in Liberal Italy analyzes Italians' changing relationship to their new nation state and the monarchy, the conflicts between the peninsula's ancient elites and the rising middle class, and the emergence of new belief systems and of scientific responses to the experience of modernity.

Part One: Political and Social Conflict

1 Notabili: The Local Persistence of the Old Régime

2 The Theatre of Social Change: Opera Industry and the End of Social Privilege

Part Two: Writing the Past.

4 The Middle Class and the Historicising of the Present

Part Three: The City, The Nation and European Culture

8 Margherita: Umbertian Italy and its Monarchy

9 "Viva Rossini – Morte a Wagner"? From Campanilismo to the Future

10 Conclusions and Epilogue: Modernity, the Political Power of Culture and the Collapse of Liberal Democracy

'Körner’s work draws brilliantly on a vast range of primary and secondary material to produce a rich and original study covering an extremely wide set of areas and themes.' – Journal of Urban History