Popes, Church, and Jews in the Middle Ages
Confrontation and Response 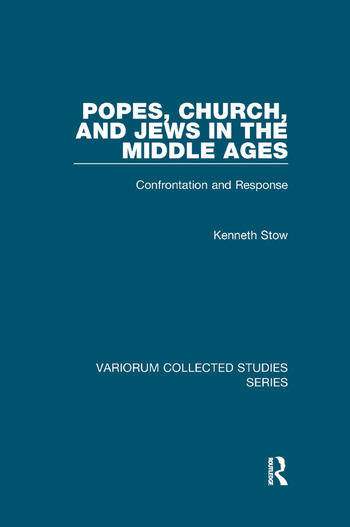 Popes, Church, and Jews in the Middle Ages: Confrontation and Response

The theme uniting the essays reprinted here is the attitude of the medieval Church, and in particular the papacy, toward the Jewish population of Western Europe. Papal consistency, sometimes sorely tried, in observing the canons and the principles announced by St Paul - that Jews were to be a permanent, if disturbing, part of Christian life - helped balance the anxiety felt by members of the Church. Clerics especially feared what they called Jewish pollution. These themes are the focus of the studies in the first part of this volume. Those in the second part explore aspects of Jewish society and family life, as both were shaped by medieval realities.

Contents: Introduction. Part 1 The Popes the Church and the Jews: The Church and the Jews; Agobard of Lyons and the origins of the medieval conception of the Jew; Papal and royal attitudes towards Jewish lending in the thirteenth century; The 1007 anonymous and Papal sovereignty; Jewish perceptions of the Papacy and Papal policy in the Middle Ages; The Avignonese Papacy, or after the expulsions; Papal mendicants or mendicant Popes: continuity and change in Papal policies towards the Jews at the end of the fifteenth century. Part 2 Jewish Life Under the Sign of the Cross: Conversion, apostacy and apprehensiveness: Emicho of Flonheim and the fear of the Jews in the twelfth century; The Jewish family in the Rhineland: form and function; Jacob b. Elie and Jewish settlement in Venice in the thirteenth century, with the addition of 'The Letter of Maestro Andrea'; Holy body, holy society: conflicting medieval structural perceptions; By land or by sea: the passage of the Kalonymides to the Rhineland in the tenth century; Index.

Kenneth Stow is Professor of Jewish History at the University of Haifa, Israel.