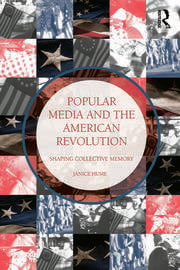 The American Revolution—an event that gave America its first real "story" as an independent nation, distinct from native and colonial origins—continues to live on in the public's memory, celebrated each year on July 4 with fireworks and other patriotic displays. But to identify as an American is to connect to a larger national narrative, one that begins in revolution. In Popular Media and the American Revolution, journalism historian Janice Hume examines the ways that generations of Americans have remembered and embraced the Revolution through magazines, newspapers, and digital media.

Overall, Popular Media and the American Revolution demonstrates how the story and characters of the Revolution have been adjusted, adapted, and co-opted by popular media over the years, fostering a cultural identity whose founding narrative was sculpted, ultimately, in revolution. Examining press and popular media coverage of the war, wartime anniversaries, and the Founding Fathers (particularly, "uber-American hero" George Washington), Hume provides insights into the way that journalism can and has shaped a culture's evolving, collective memory of its past.

Dr. Janice Hume is a professor and head of the Department of Journalism in the Grady College of Journalism and Mass Communication at the University of Georgia. She is author of Obituaries in American Culture (University Press of Mississippi, 2000) and co-author of Journalism in a Culture of Grief (Routledge, 2008).

Prologue: Revolution, Journalism and American Identity; 1. Building the American Story; 2. "The Gathering Mists of Time"; 3. The Nation’s First Washington; 4. The (Not Quite) Anniversary of Independence; 5. American Characters; 6. "We Hold These Truths to Be Self Evident" 7. The Electronic Revolution; 8. Who’s Your Founding Father?

Dr. Janice Hume is a professor and head of the Department of Journalism in the Grady College of Journalism and Mass Communication at the University of Georgia. She is author of Obituaries in American Culture (University Press of Mississippi, 2000) and co-author of Journalism in a Culture of Grief (Routledge, 2008).

"Drawing on evidence from three centuries, Popular Media and the American Revolution recounts the stories that newspapers, magazines, and television programs have told about the country’s founding – stories that merge fact with folklore, local pride with national unity, and political purpose with popular sentiment, and that over time have crystallized into public memory. Entertaining as well as illuminating, Janice Hume’s study ably affirms the central role of journalism in the construction of national mythology." - Carolyn Kitch, Professor of Journalism, Temple University

"Hume writes clearly and concisely. She chooses examples well and makes creative use of multiple sources...Overall...this book makes a positive contribution. It really takes little more than a visit to any community July 4th celebration to underline that her insights stand up well." - Carl Sessions Stepp, University of Maryland, in Journalism & Mass Communication Quarterly