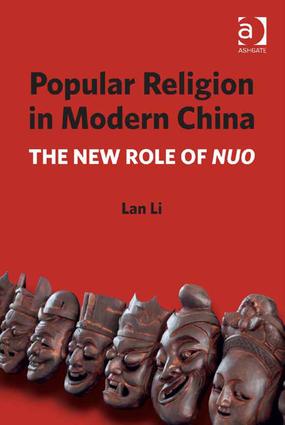 Since the early 1980s, China's rapid economic growth and social transformation have greatly altered the role of popular religion in the country. This book makes a new contribution to the research on the phenomenon by examining the role which popular religion has played in modern Chinese politics. Popular Religion in Modern China uses Nuo as an example of how a popular religion has been directly incorporated into the Chinese Community Party's (CCP) policies and how the religion functions as a tool to maintain socio-political stability, safeguard national unification and raise the country's cultural 'soft power' in the eyes of the world. It provides rich new material on the interplay between contemporary Chinese politics, popular religion and economic development in a rapidly changing society.

’This book is a rich ethnographic account of Nuo religious culture among the Tujia ethnic minority living in contemporary Guizhou, China. Nuo culture combines exorcism, divination, religious drama using face masks, and ancestor and deity worship. Although found at the margins of Han Chinese society today, Nuo traces back to the power centers of ancient China, at the courts of the theocratic state during the Zhou Dynasty. The Confucianization of the imperial state led to the decline of Nuo culture, but it was preserved by ethnic minorities who adapted it down to modern times. Besides the excellent ethnography, the book displays three other admirable strengths: the longue durée historical perspective; the account of changes in modern Chinese state attitudes towards religion and Nuo culture; and the discussion of the political and commercial uses and deployments of Nuo by local communities, and the local and central governments.’ Mayfair Yang, University of California, USA

Lan Li received her PhD in Social Anthropology from Queen's University Belfast, UK in 1998 and the research was funded by the university and the Royal Anthropological Institute of Great Britain and Ireland. Her doctoral thesis, entitled 'Nuo: Shamanism among the Tujia of Southwest China' studied the rise of popular religions in contemporary China and its changing role in the process of profound social transformation in post-Mao era. The thesis was later published in book form in Chinese. Her most recent publication in this area is the article entitled 'The Changing Role of the Popular Religion of Nuo in Modern Chinese Politics' which was published by Modern Asian Studies in 2010. Dr Li is a member of the British Association for Chinese Studies and the Association for Chinese Studies in Ireland. She is currently a member of staff at the Irish Institute for Chinese Studies at University College Dublin.