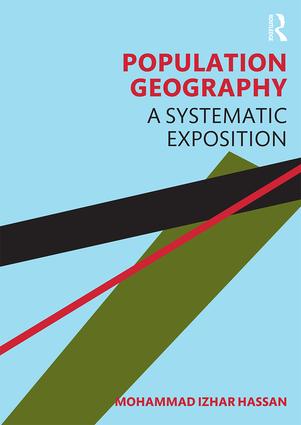 This book studies the origins and development of population geography as a discipline. It explores the key concepts, tools, and statistical and demographic techniques that are widely employed in the analysis of population. The chapters in this book:

Well supplemented with figures, maps, and tables, this key text will be an indispensable read for students, researchers and teachers of human geography, demography, anthropology, sociology, economics, and population studies.

Mohammad Izhar Hassan is senior Professor of Geography at Maharshi Dayanand University, Rohtak, Haryana, India. He also served as Professor at Ravenshaw University, Odisha, India (2014–17), and has been a recipient of the UGC Research Award on a project entitled Demographic Situation in Odisha and its Development Implication. His research mainly focuses on population studies in geography. Twelve Ph.D. scholars and seventeen M.Phil. students have obtained their degrees under his guidance. He has authored four books and three dozen research papers, published in journals of national and international repute. He is life member of several professional bodies/societies including Indian Association for the Study of Population, Indian Regional Science Association, National Association of Geographers India, Institute of Indian Geographers, Geographical Society of India, Eastern Geographical Society, etc.