Populism and the Crisis of Democracy
Volume 2: Politics, Social Movements and Extremism 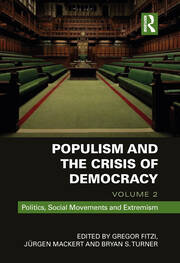 Populism and the Crisis of Democracy: Volume 2: Politics, Social Movements and Extremism

The contributions to this volume Politics, Social Movements and Extremism take serious the fact that populism is a symptom of the crisis of representation that is affecting parliamentary democracy. Right-wing populism skyrocketed to electoral success and is now part of the government in several European countries, but it also shaped the Brexit campaign and the US presidential election. In Southern Europe, left-wing populism transformed the classical two parties systems into ungovernable three fractions parliaments, whereas in Latin America it still presents an instable alternative to liberal democracy.

The varying consequences of populist mobilisation so far consist in the maceration of the established borders of political culture, the distortion of legislation concerning migrants and migration, and the emergence of hybrid regimes bordering on and sometimes leaning towards dictatorship. Yet, in order to understand populism, innovative research approaches are required that need to be capable of overcoming stereotypes and conceptual dichotomies which are deeply rooted in the political debate.

into the multi-faceted populist phenomenon. The chapters analyse its language,

concepts and its relationship to social media in an innovative way, draw the con -

political extremism. Furthermore, they value the most significant aftermath of

populist mobilisation on the institutional frame of parliamentary democracy from

the limitation of the freedom of press, to the dismantling of the separation of

powers, to the erosion of citizenship rights. This volume will be an invaluable

reference for students and scholars in the field of political theory, political

Introduction: Political Populism as A Symptom of the Great Transformation of Democracy  Part I: Language, Media and the Law  1. The Micro-Politics of Right-Wing Populism  2. Populism 2.0, Social Media and the False Allure of ‘Unmediated’ Representation  3. From Protecting Individual Rights to Protecting the Public: The Changing Parameters of Populist-Driven Criminal Law and Penal Policy  Part II: Dimensions of Right-Wing Populism  4. Right-Wing Populism in Context: A Historical and Systematic Perspective  5. Populism and the Radical Right in Europe: The Paradigmatic Case of the French Front National  6. Ambivalences of Cosmopolitanisms, Elites and Far-Right Populisms in Twenty-First Century Europe  Part III: Regimes, Party Systems, and Political Subjects  7. The Role of Populist Parties and Movements in Transitions to Hybrid Regimes in Europe  8. Populism as a Challenge for Party Systems: A Comparison Between Italy and Spain  9. ‘Citizens’ or ‘People’? Competing Meanings of the Political Subject in Latin America

is Professor of Sociology and co-director of the ‘Centre for Citizenship, Social Pluralism and Religious Pluralism’ at Potsdam University, Germany. His research interests are in sociology of citizenship, political economy, closure theory, collective violence. His most recent publication is The Transformation of Citizenship (Routledge, 2017), in 3 volumes, co-edited with Bryan S. Turner.

is Professor of the Sociology of Religion at the Australian Catholic University, Honorary Professor at Potsdam University and Honorary Fellow in The Edward Cadbury Centre, Birmingham University. In 2015 he received the Max Planck Award from the Max-Planck Society and Alexander von Humboldt Foundation, Germany. He is editor of Citizenship Studies, the Journal of Classical Sociology, and the Journal of Religious and Political Practice. He is also Chief Editor of the Wiley-Blackwell Encyclopedia of Social Theory (2017).