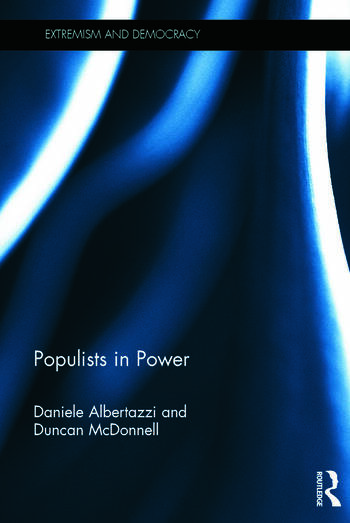 The main area of sustained populist growth in recent decades has been Western Europe, where populist parties have not only endured longer than expected, but have increasingly begun to enter government. Focusing on three high-profile cases in Italy and Switzerland – the Popolo della Libertà (PDL), Lega Nord (LN) and Schweizerische Volkspartei (SVP) – Populists in Power is the first in-depth comparative study to examine whether these parties are indeed doomed to failure in office as many commentators have claimed.

Albertazzi and McDonnell’s findings run contrary to much of the received wisdom. Based on extensive original research and fieldwork, they show that populist parties can be built to last, can achieve key policy victories and can survive the experience of government, without losing the support of either the voters or those within their parties.

Contributing a new perspective to studies in populist politics, Populists in Power is essential reading for undergraduate and postgraduate students, as well as scholars interested in modern government, parties and politics.

Daniele Albertazzi is a Senior Lecturer in European Politics at the University of Birmingham, UK.

Duncan McDonnell is a Senior Lecturer in Politics at the School of Government and International Relations in Griffith University, Brisbane, Australia.

"When mainstream parties can't prevent their populist rivals doing well in elections they can always take comfort in the fact that, if they ever do so well that they get into government, they're bound to make a mess of things, right?  Wrong.  In this fascinating book, McDonnell and Albertazzi take a look at all the available evidence - a good deal of which they themselves have gathered - and give the lie to this common and all-too-convenient wisdom"
-- Tim Bale, Professor of Politics, Queen Mary University of London

"This book represents a key development in the study of European populism, showing through rigorous research that populism in power is not what many expect it to be. As populism grows and develops in Europe, this book advances our knowledge in ways that challenge conventional understanding and allows us to make sense of the growing realities of populists in power"
-- Paul Taggart, Professor of Politics, University of Sussex

"Albertazzi and McDonnell do an excellent job in presenting the ideologies, organizational models and recent experiences in power of the most important Italian and Swiss populist parties. The findings of this timely analysis of populists in power make an important contribution to the study of West European party systems"
--Hanspeter Kriesi, Stein Rokkan Chair of Comparative Politics, European University Institute, Florence

"Albertazzi (Univ. of Birmingham, UK) and McDonnell (Griffith Univ., Australia) challenge the conventional wisdom that populist (right-wing) parties in Europe are marginal actors that cannot govern effectively if they are included in a government, inevitably lose vote share after they are in government, and cannot deliver on their key programmatic promises...The book is written accessibly enough for advanced undergraduates."
--R. Kolodny, Temple University, CHOICE

"Methodologically it is an all-round study, comprising a broad array of data such as manifestos, key texts, policies, but also individual and group interviews of over 100 members and representatives and surveys. It is the first study that examines in-depth how representatives and members of the populist parties assess the experiences of their parties in government [...] This book will certainly stimulate further comparative research to test the claim that populism does not pose inherent problems when power is assumed. As an in depth small N study that provides rich and original research outcomes, Populists in Power is a must-read for everyone interested in the political prospects of populist parties."