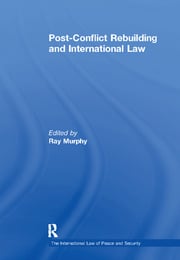 This volume presents the research analysis of a range of scholars and experts on post conflict peacebuilding and international law from a variety of perspectives and missions. The selected essays show that peacebuilding, like the concept of peacekeeping, is not specifically provided for in the UN Charter. They also demonstrate that the record of peacebuilding, like that of peacekeeping, is varied and while both concepts are intrinsically linked, neither lends itself to precise definition. The essays consider the historical approaches to peacebuilding such as the role played by the UN in the Congo in the early 1960s and the work of the United States and its allies in rebuilding Germany and Japan in the aftermath of World War II. Finally, essays consider the major challenge for contemporary peacebuilding operations to make international administrations accountable and to ensure the involvement of the international community in helping rebuild communities and prevent the resurgence of violence.

Ray Murphy is Senior Lecturer in Law at the Irish Centre for Human Rights, School of Law, National University of Ireland Galway, Ireland