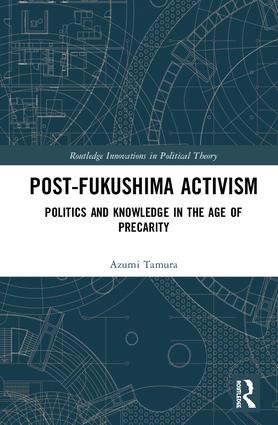 Politics and Knowledge in the Age of Precarity, 1st Edition

Political disillusionment is widespread in contemporary society. In Japan, the search for the ‘outside’ of a stagnant reality sometimes leads marginalised young people to a disastrous image of social change. The Fukushima nuclear disaster was the realisation of such an image, triggering the largest wave of activism since the 1960s. The disaster revealed the interconnected nature of contemporary society. The protesters regretted that their past indifference to politics prefigured such a catastrophe and became motivated to protest in the streets. They did not share any totalising ideology or predetermined collective identity. Instead, the activism provided a space for each body to encounter others who forced them to feel and think, which also introduced an ethical dimension to their politics.

In this book, Azumi Tamura proposes a concept of politics as a series of endless experiments based on creative responses to unexpected forces. Instead of searching for a transcendental reference for politics, she investigates an immanent force within individuals that motivates them to become involved in political action. Referencing Deleuzian philosophy, Tamura provides a different epistemological and ontological approach to the social movement studies. She suggests social movements themselves generate knowledge about how one may live better in a complex society and where our lives are exposed to uncertainty. This knowledge is neither empirical knowledge, nor normative political theory of ‘how we should live’. Instead, social movements bring affective knowledge into politics as they offer a space for experimenting with ‘how we might live.’ The encounter with such knowledge galvanizes our desire for ‘how we want to live’ and encourages new experiments.

'Fabulous and fascinating! How do we move forward in a world of catastrophes? How do we stay human when there seems to be no hope of a better world? How do we stay hoping in a world of growing inhumanity? How do we get out of here? Azumi Tamura’s study of radical activism in Japan after the Fukushima nuclear disaster breaks all national frontiers and goes to the heart of the battle between hope and hopelessness that rages (really rages) in all the world. Read it.' - John Holloway, Benemérita Universidad Autónoma de Puebla

'Azumi Tamura's book manages to bring together Japanese social movements and Deleuzian social theory in way that is revealing, insightful and provocative. Japan has been a neglected area for social movement research and this book brings to light what has been missing from the discipline. It traces currents of resistance from the late 1960s in to the upsurge of activism after the Fukushima disaster, and offers us new ways of conceiving the role of social movements in contemporary informationalised societies.' - Graeme Chesters, Associate Professor in Peace and Conflict Studies, University of Bradford

1. Hope in The Battlefield: Political Predicament in Japanese Society

5. Knowledge and Affect in Post-Fukushima Activism

7. Non-Hegemonic Knowledge in the Age of Precarity

Azumi Tamura is a visiting researcher at the Institute of International Relations and Area Studies at Ritsumeikan University in Japan. She received her PhD in Peace Studies in 2016 from the University of Bradford, UK.