Post-Socialist Political Graffiti in the Balkans and Central Europe 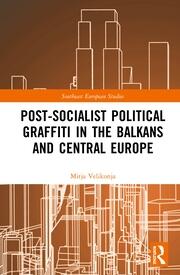 Post-Socialist Political Graffiti in the Balkans and Central Europe

This theoretically and empirically grounded book uses case studies of political graffiti in the post-socialist Balkans and Central Europe to explore the use of graffiti as a subversive political media.

Despite the increasing global digitisation, graffiti remains widespread and popular, providing with a few words or images a vivid visual indication of cultural conditions, social dynamics and power structures in a society, and provoking a variety of reactions. Using qualitative and quantitative methods, as well as detailed interdisciplinary analyses of "patriotic," extreme-right, soccer-fan, nostalgic, and chauvinist graffiti and street art, it looks at why and by whom graffiti is used as political media and to/against whom it is directed. The book theorises discussions of political graffiti and street art to show different methodological approaches from four perspectives: context, author, the work itself, and audience.

It will be of interest to the growing body of literature focussing on (sub)cultural studies in the contemporary Balkans, transitology, visual cultural studies, art theory, anthropology, sociology, and studies of radical politics.

Part One: Introduction to Graffiti and Street Art Studies

Conclusion: Power of the Street (Art), Powerlessness of (Street) Art

Mitja Velikonja, PhD, is a Professor of Cultural Studies and Head of the Centre for Cultural and Religious Studies at the Faculty of Social Sciences, University of Ljubljana, Slovenia.

Velikonja has been reading the landscapes of post-communist societies positioning himself not above, but beneath: from every day life, from it’s marginal, subcultural edges. Thus, he opposes and subverts heavy, hierarchical, masculine, militant, "state" version of recent historical events. He is one of the most creative, inventive and amusing "readers" of contemporary Central European and Balkan ideological constellations. In this book Velikonja invented a new science: "graffitology". Reading graffiti within Balkan and Central European urban landscape Velikonja acts like a cultural graphologist. He is a post-communist Doctor Dolittle: reading, understanding and interpreting the language of graffiti Velikonja provides more relevant diagnosis of transitional societies and their maladies then the most of "official historians". - Dubravka Ugrešić, author of The Culture of Lies and The Ministry of Pain

"Focusing on the complex interplay between social structure, ideology and aesthetic resolutions, and as a result of a long-term engagement and meticulous field-work, this book presents a very personal reading of graffiti, this underestimated genre of "profane culture." The value of this work is both general, in offering what amounts to a theoretical "manual" of analyzing methods for approaching the visual culture of street art, and area specific. Engaging in case studies from the period of "transition," Velikonja suggests the flexibility of graffiti, showing both their potential to be neutered through domestication and aestheticization, as well as their capacity for serious political subversion." - Maria Todorova, professor at University of Illinois at Urbana-Champaign, author of Imagining the Balkans

"A vital contribution to the literature on the ongoing political transformations in Europe’s (South)East by one of the leading authorities on the subject. Velikonja’s appreciation and sympathy for the deeply personal and traumatic aspects of these grand historical transitions comes to the fore in this text, making this a paradigmatic contribution to debates about East European civil society and youth culture." - Dr. Jasmin Mujanović, author of Hunger and Fury: The Crisis of Democracy in the Balkans

"Professor Mitja Velikonja not only provides systematic theorizing about the significance of graffiti and street art but shares deep insights on the profound crises of transition in post-communist Eastern Europe, a region which he understands profoundly." - Paul Mojzes, professor emeritus at Rosemont College, PA, and editor of Occasional Papers on Religion in Eastern Europe

"Thanks to the author’s broad knowledge of the Balkans and Central Europe, this systematic investigation of political graffiti brings important insight into grassroots engagement in a troubled region during a complex transitional period." - Svein Mønnesland, professor emeritus at University of Oslo, member of the Norwegian Academy of Science and Letters

"The images contained in this fascinating study of graffiti and street art in the Balkans and Central Europe represent a major effort to open a window to the complexities of the region's development since the end of the Cold War, complemented by a innovative quantitative as well as qualitative analysis of post-socialist popular art and politics. This book will be of great interest not only to cultural historians and social scientists of Europe, but also of the Americas, Asia or wherever else graffiti have become an intriguing expression of radical modern culture and politics." - Volker R. Berghahn, professor at Columbia University, New York, author of Europe in the Era of Two World Wars: From Militarism and Genocide to Civil Society, 1900-1950

"Mitja Velikonja truly knows that the words of the prophets are often written on city walls and, moreover, teaches us how to read them. Drawing on his enormous erudition, ranging from political theory and aesthetics to bizarre popular subcultures, the author examines graffitis across the post-socialist zone and explains what on earth happened to us all (both in the East and the West) after 1989. With this book, Velikonja is about to launch graffitology as a new academic congregation. Join it today!" - Igor Štiks, the author of Nations and Citizens in Yugoslavia and the Post-Yugoslav States: One Hundred Years of Citizenship