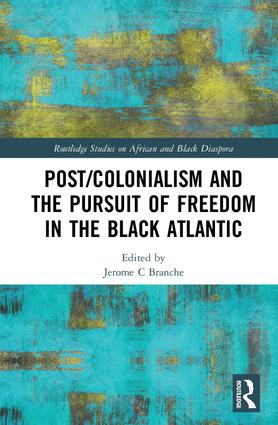 Post/Colonialism and the Pursuit of Freedom in the Black Atlantic

Post/Colonialism and the Pursuit of Freedom in the Black Atlantic is an interdisciplinary collection of essays of wide historical and geographic scope which engages the legacy of diaspora, colonialism and slavery.

The contributors explore the confrontation between Africa’s forced migrants and their unwelcoming new environments, in order to highlight the unique individual experiences of survival and assimilation that characterized Atlantic slavery. As they focus on the African or Afro-diasporan populations under study, the chapters gauge the degree to which formal independence, coming out of a variety of practices of opposition and resistance, lasting centuries in some cases, has translated into freedom, security, and a "good life."

By foregrounding Hispanophone, Lusophone, and Francophone African and Afro-descendant concerns, over and against an often Anglo-centric focus in the field, the book brings a more representative approach to the area of diaspora or Black Atlantic studies, offering a more complete appreciation of Black Atlantic cultural production across history and across linguistic barriers.

4. From Lusotropicalism to Lusofonia: Brazil-Angola Cultural Exchanges under the Sign of Coloniality, Emmanuelle Santos

5. Origins and Representations of the Dictatorial State in Postcolonial Africa, Robert Spencer

6. Restless Flying from Tunisia to Haiti: A Question of Locating the Tunisian Revolution in Relation to Haiti and the Postcolonial Black Atlantic, R.A. Judy

7. No Telephone to Heaven: Post-Colonial Writing, the Pursuit of Freedom and Colonialism’s Genocidal Impulse, Luis Madureira

8. The Lines of Anti-imperialism: The Circulation of Militant Cinema During the Long 1960s, Luis Trindade

11. A Post-Colonial, National, and Post-National Discourse in Angola Poetry in the Work of Manuel Rui, Robert Simon

12. Citizenship and Freedom in the Black Atlantic after 1945 – Context and Challenge, Cary Fraser

Jerome Branche is Professor of Latin American Literature and Cultural Studies at the University of Pittsburgh, USA.

Routledge  Studies  on  African  and  Black  Diaspora is  designed  as  a  forum  that confronts established  academic  boundaries  in  the  study  of  social,  cultural  and political history of people  of  African  descent  while  at  the  same  time  exploring  the  contours  of  knowledge production and  understanding about Africa and its diaspora through rigorous and critical scrutiny.

The series marks a critical development in publishing theoretically and historically significant works   on   the   lived   experiences   of   people   of   African   descent   in   all  parts  of  the world. The  series publishes original works of the highest    quality   from  across  the broad  disciplinary  fields  of  social  sciences  and  humanities  with  a  strong  emphasis  on theoretically informed  and  empirically  grounded  texts.  Focus  issues  include  the centrality of power  and resistance, knowledge production, gendered cartographies, memory, race, class and  other aspects of social identity   in exploring   different dimensions (cultural, geographic, political, social and psychological)  through which people  of  the  African  descent have  moved in  the context  of globalized and transnational spaces.

The editors welcome book proposals as well as manuscripts that address issues related to  African and Black  Diaspora. Single authored manuscripts as well as thematically coherent  edited  volumes will  be considered.  Inquiries should be directed to the Series Editors or the Routledge editor: