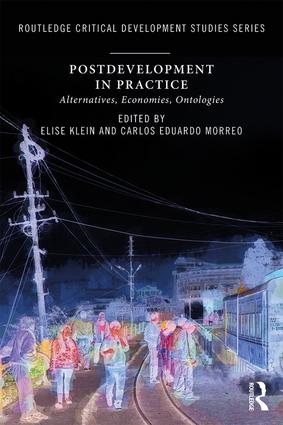 Postdevelopment in Practice critically engages with recent trends in postdevelopment and critical development studies that have destabilised the concept of development, challenging its assumptions and exposing areas where it has failed in its objectives, whilst also pushing beyond theory to uncover alternatives in practice.

This book reflects a rich and diverse range of experience in postdevelopment work, bringing together emerging and established contributors from across Latin America, South Asia, Europe, Australia and elsewhere, and it brings to light the multiple and innovative examples of postdevelopment practice already underway. The complexity of postdevelopment alternatives are revealed throughout the chapters, encompassing research on economy and care, art and design, pluriversality and buen vivir, the state and social movements, among others. Drawing on feminisms and political economy, postcolonial theory and critical design studies, the ‘diverse economies’ and ‘world of the third’ approaches and discussions on ontology and interdisciplinary fields such as science and technology studies, the chapters reveal how the practice of postdevelopment is already being carried out by actors in and out of development.

Students, scholars and practitioners in critical development studies and those seeking to engage with postdevelopment will find this book an important guide to applying theory to practice.

"In Postdevelopment in Practice, dynamic co-editors Elise Klein and Carlos Eduardo Morreo combine their talents to provide an inspirational volume. They marshal an exceptional group of emerging and established critical thinkers—academics, activists and artists from the global South and North—to explore alternate ways of being and living in a world that is increasingly hazardous to human and non-human species alike. This absorbing book theoretically interrogates and empirically documents diverse forms of ‘postdevelopment in practice’. Its future-focused perspectives will challenge and richly reward the politically-engaged reader." -- Jon Altman, Emeritus Professor, The Australian National University, Canberra, Australia

Part I. Theorising a practice of postdevelopment

21. Postdevelopment in Practice, an Invitation

Elise Klein is a Senior Lecturer of Development Studies in the School of Social and Political Sciences at the University of Melbourne, Australia

The global crisis, coming at the end of three decades of uneven capitalist development and neoliberal globalization that have devastated the economies and societies of people across the world, especially in the developing societies of the global south, cries out for a more critical, proactive approach to the study of international development. The challenge of creating and disseminating such an approach, to provide the study of international development with a critical edge, is the project of a global network of activist development scholars concerned and engaged in using their research and writings to help effect transformative social change that might lead to a better world.

This series will provide a forum and outlet for the publication of books in the broad interdisciplinary field of critical development studies—to generate new knowledge that can be used to promote transformative change and alternative development.

The editors of the series welcome the submission of original manuscripts that focus on issues of concern to the growing worldwide community of activist scholars in this field.