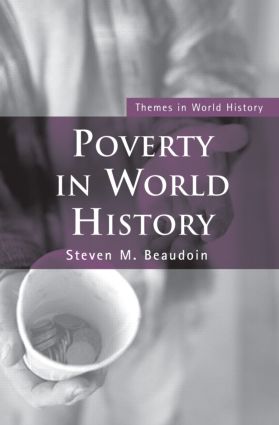 A genuinely global survey of world poverty from 1500 to the present day, Poverty in World History focuses upon the period from around 1500 onwards when poverty became a global issue, and uses the process of globalization as the chief lens through which to study and understand poverty in world history.

The result is both a tying together of significant strands of world history, and an examination of changing attitudes towards poverty and poor relief throughout the world. This wide ranging study underscores a major consequence of increased cultural and economic interaction among the world's societies, highlighting the similarities and differences in impacts and responses to the resulting 'smaller' globe. Topics include:

Introduction 1. Poverty and Charity in the Pre-Modern World: Causes, Perceptions, and Strategies 2. Poverty in the Emerging Global Economy 3. Innovations in Early Modern Poor Relief 4. Industrialization, Imperialism, and World Poverty, 1750–1945 5. Poverty, Morality, and the State, 1750–1945 6. Poverty and Poor Relief after 1945. Conclusion