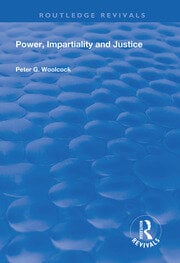 First published in 1998, this volume argues that two conditions need to be met for any agreement between people with conflicting desires to count as an unforced one, namely, that the parties argue as if they had equal power and that their antipathy to being coerced exceeds their desire to coerce others. These conditions entail objective moral principles and a theory of justice, modifying and developing Rawls’ contractarian theory, but without the veil of ignorance. They support Rawls on basic civil liberties and constitutional liberal democratic government, including religious tolerance, anti-paternalism, anti-racism and anti-sexism, but dispute his Difference Principle, his circumstances of justice, Laws of Peoples, reflective equilibrium, and freedom of conscience as a basic liberty. The book also gives a contractarian account of epistemology, metaethics, education, the rationality of being moral, the rights of animals and other non-persons, and the rights of indigenous peoples. Writers such as Brian Barry, R.S. Peters, Isaiah Berlin, Vinit Haksar, Jurgen Habermas, R.M. Hare, Philip Pettit, Derek Parfit, Michael Smith, Peter Geach, Philippa Foot, Bronwyn Davies, Quentin Skinner and Will Kymlicka are also discussed.

’An extremely accurate interpretation of my position - perhaps the best I have seen so far... . (He has) grasped the central doctrine which I wish to put forward more accurately, and expounded it better, than anyone else who has dealt with it in the considerable literature which this essay has stirred up. It is wonderful to find people who, after all these years, understand not only oneself, but the fallacies of one's critics.’ the late Sir Isaiah Berlin, Oxford University, author of Two Concepts of Liberty ’[Woolcock] sets himself a clearly worthwhile task and achieves his objective in a way that shows originality and a fine ability for critical thinking... His work is clearly structured and throughout a work of argument. Reading it has improved my understanding of the hypothetical contractarian approach to modern philosophy.’ Dr Harry Beran, University of Wollongong, author of The Consent Theory of Political Obligation ’...one of the most valuable contributions to the field. As we have philosophy of law and philosophy of education, there is no reason why there should not be a philosophy of arbitration in which Peter Woolcock’s would have been a pioneering work.’ ”the late Professor Julius Kovesi, University of Western Australia, author of Moral Notions