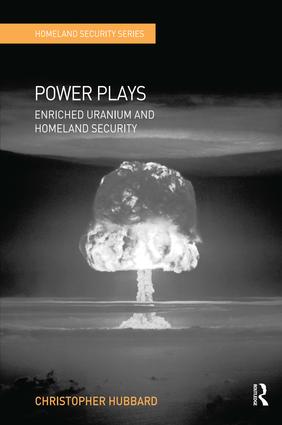 A comprehensive exploration of how national and state security policy is effected by the production, storage, transportation, safeguarding, export and use of enriched uranium - and, by extension, plutonium. A wide range of geopolitical, security and technical issues are examined, as are the challenges presented to national and global governance. This book contributes to a new understanding of one of the most serious security implications inherent in the current rapid growth in nuclear power generation. It assesses attempts made to deal with the latent dangers to Homeland Security posed by potential misuse of enriched uranium and plutonium, considering both the chances for success, and the costs of failure.

'…reflects on the forty years of nuclear history since the NPT and argues that the world must have a rules-based nuclear order and one in which enriched uranium and plutonium can be guaranteed by international cooperation to the growing number of countries that are turning to nuclear power. Herein lies an important response to climate change, terrorism and weapons proliferation.' Wayne Reynolds, Newcastle University, Australia

This series seeks to provide a body of case studies to explore the growing importance and prominence of homeland security to national defence policy and to examine the development of homeland security within the broader context of national defence policy in the United States and other major developed states. This series will identify and analyze the major threats that are particular to homeland security, as well as those that affect broader national security interests. Comparative studies will be used to elucidate the major similarities and differences in how states approach homeland security and works which advocate new or non-traditional approaches to homeland security. The series aims to integrate information from scholars and practitioners to provide works which will influence the policy debate and examine the ramifications of policy.