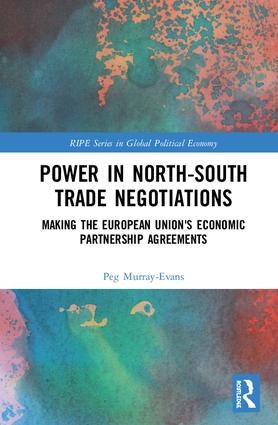 Advancing a constructivist conceptual approach, this book explains the surprising outcome of the Economic Partnership Agreements (EPAs) between the European Union and developing countries in Africa, the Caribbean and the Pacific (the ACP countries). Despite the EU’s huge market power, it had limited success with the EPAs; an outcome that confounds materialist narratives equating trade power with market size.

Why was the EU unable to fully realise its prospectus for trade and regulatory liberalisation through the EPA negotiations? Emphasising the role of social legitimacy in asymmetrical North–South trade negotiations, Murray-Evans sets the EPAs within the broader context of an institutionally complex global trade regime and stresses the agency of both weak and strong actors in contesting trade rules and practices across multilateral, regional and bilateral negotiating settings. Empirical chapters approach the EPA process from different institutional angles to explain and map the genesis, design, promotion and ultimately limited impact of the EU’s ambitious prospectus for the EPAs.

"Murray-Evans persuasively argues that trade politics is about more than just market power. Combining a bird’s eye view with a detailed empirical examination of EU negotiations with developing countries, she offers a compelling account of the understudied role of ideas in underpinning the social legitimation of trade policies. As such, this book offers some of the most important insights to date into the rapidly shifting contours of the global trading system. An absolute must-read." - Gabriel Siles-Brügge, University of Warwick, UK

"With its combination of deep empirical insight with theoretical lucidity, this outstanding book develops a distinctive understanding of the limits of the EU’s market power within the politics of international trade. Peg Murray-Evans challenges us to think anew about how power works within the institutionally complex international trade regime and in so doing makes major contributions to both constructivist International Political Economy and the study of the EU’s external relations." - Ben Rosamond, University of Copenhagen

"In this important and engaging work, Murray-Evans explores the promise and pitfalls of the exercise of power in the global political economy. Empirically rich and theoretically innovative Power in North-South Trade Negotiations challenges received wisdom aboutthe capacity of the EU to act assertively on the world stage as well as conventional understandings of the inability of developing countries to exercise agency in crafting their futures." - Rorden Wilkinson, University of Sussex

3. The Evolving Rules and Practice of Trade with Developing Countries: From Lomé to Cotonou

4. North-South PTAs and the Multilateral System: Contesting The EPAs

5. Regionalisms Collide: The EPAs in Africa

6. Institutions and Agency on the Periphery: The SADC EPA

Peg Murray-Evans is a research associate in the Department of Politics at the University of York. Her research explores the way in which power in global economic governance is shaped by claims to legitimacy and the institutional structures in and through which these claims are made, with a particular focus on development and the Global South. She has worked and published on topics including the role of South Africa as a ‘rising power’ in global governance, European Union trade and development policy and the UK’s relationship with the Commonwealth after Brexit. Her research has been published in European Journal of International Relations, Third World Quarterly and The Round Table.