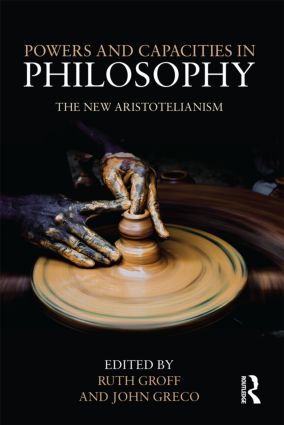 Powers and Capacities in Philosophy

Powers and Capacities in Philosophy is designed to stake out an emerging, discipline-spanning neo-Aristotelian framework grounded in realism about causal powers.

The volume brings together for the first time original essays by leading philosophers working on powers in relation to metaphysics, philosophy of natural and social science, philosophy of mind and action, epistemology, ethics and social and political philosophy.  In each area, the concern is to show how a commitment to real causal powers affects discussion at the level in question. In metaphysics, for example, realism about powers is now recognized as providing an alternative to orthodox accounts of causation, modality, properties and laws. Dispositional realist philosophers of science, meanwhile, argue that a powers ontology allows for a proper account of the nature of scientific explanation. In the philosophy of mind there is the suggestion that agency is best understood in terms of the distinctive powers of human beings. Those who take virtue theoretic approaches in epistemology and ethics have long been interested in the powers that allow for knowledge and/or moral excellence. In social and political philosophy, finally, powers theorists are interested in the powers of sociological phenomena such as collectivities, institutions, roles and/or social relations, but also in the conditions of possibility for the cultivation of the powers of individuals. The book will be of interest to philosophers working in any of these areas, as well as to historians of philosophy, political theorists and critical realists.

Powers were central to the Aristotelian worldview that held sway for centuries but were largely left behind during the Scientific Revolution when laws replaced powers as the primary vehicles of explanation. We are now seeing a welcome rebirth of interest in the metaphysics and explanatory role of powers. Powers and Capacities in Philosophy: A New Aristotelianism brings together an impressive collection of original papers by some of the foremost philosophers writing on the topic of powers today.

This excellent collection of original essays in power ontology is bound to become a classic, a must-have in public and personal libraries. It includes a large number of contributions by the most distinguished researchers in the subject, covering the metaphysics of powers, and the role of powers in philosophy of science, philosophy of mind and action, ethics, epistemology, social and political philosophy. The volume as a whole pushes forward the boundaries of our understanding of what powers are, and what they do for us, and will thus generate much discussion in this area of burgeoning research activity.