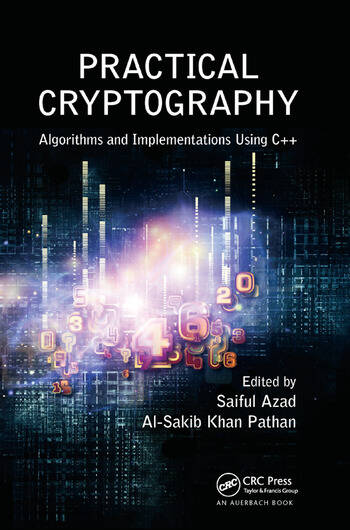 Cryptography, the science of encoding and decoding information, allows people to do online banking, online trading, and make online purchases, without worrying that their personal information is being compromised. The dramatic increase of information transmitted electronically has led to an increased reliance on cryptography. This book discusses the theories and concepts behind modern cryptography and demonstrates how to develop and implement cryptographic algorithms using C++ programming language.

Written for programmers and engineers, Practical Cryptography explains how you can use cryptography to maintain the privacy of computer data. It describes dozens of cryptography algorithms, gives practical advice on how to implement them into cryptographic software, and shows how they can be used to solve security problems.

Covering the latest developments in practical cryptographic techniques, this book shows you how to build security into your computer applications, networks, and storage. Suitable for undergraduate and postgraduate students in cryptography, network security, and other security-related courses, this book will also help anyone involved in computer and network security who wants to learn the nuts and bolts of practical cryptography.

Saiful Azad received his PhD in information engineering at University of Padova, Italy in 2013. He completed his B.Sc. from IUT, Bangladesh in computer and information technology, and M.Sc. from IIUM, Malaysia in computer and information engineering. After completion of his PhD, he joined as a faculty member in the Department of Computer Science at American International University – Bangladesh (AIUB). He started working on Underwater Acoustic Networks during his PhD and still it remains his main focus of research. His research interests also lie in designing and implementing communication protocols for any network architecture, QoS issues, network security, and simulator design. He is one of the developers of the DESERT underwater simulator. He is also the author of more than 30 scientific papers published in international peer-reviewed journals or conferences. He has served as a technical program committee member in numerous international conferences/workshops. He also serves as a reviewer of a couple of renowned peer-reviewed journals and conferences.

earned his PhD (MS leading to PhD) in computer engineering in 2009 from Kyung Hee University in South Korea. He earned his BS in computer science and information technology from IUT, Bangladesh, in 2003. He is currently an assistant professor in the Computer Science Department of IIUM. Until June 2010, he served as an assistant professor in the Computer Science and Engineering Department of BRAC University, Bangladesh. Prior to holding this position, he worked as a researcher at the networking lab of Kyung Hee University, South Korea, until August 2009.

Dr. Pathan’s research interests include wireless sensor networks, network security, and e-services technologies. He has been a recipient of several awards/best paper awards and has several publications in these areas. He has served as chair, an organizing committee member, and a technical program committ