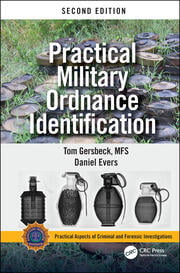 The threat variables associated with military ordnance are enormous, requiring the application of a structured process to identify unknown munitions. The focus of Practical Military Ordnance Identification, Second Edition is the application of a practical deductive process to identify unknown ordnance items that are commonly recovered outside military control.

The author supplies a seven-step procedure to identify unknown munitions by their category, group, and type. Detailed logic trees help users narrow down the possibilities in order to accurately identify ordnance. The book covers the safety precautions associated with each category and group of ordnance. It describes many ordnance construction characteristics and explains the fundamentals of military ordnance fuzing. Appendices define terms and supply abbreviations and acronyms used to describe military ordnances.

in the U.S. Marine Corps, retiring in 2001 as a Chief Warrant Officer. He

explosives security specialist before deploying as an independent contractor.

throughout the country. Deployments supporting Department of State

as an EOD team lead in Iraq, advising the Tanzanian Peoples Defense Force

Today, Tom is a full-time member of the graduate faculty for Oklahoma

& Toolmarks Investigation (AEFTI) program. He holds a master of forensic

sciences (MFS) degree, is an active member of the International Association

of Bomb Technicians and Investigators (IABTI), is a Fellow in the American

Academy of Forensic Sciences (AAFS), and continues to work in his field.

joined the Marine Corps in 2003 and currently serves as

an Explosive Ordnance Disposal (EOD) technician. While stationed in

Romania, Latvia, and Georgia in support of combat operations, responding

to IED and ordnance related calls for assistance, and training personnel

ordnance knowledge and research abilities were developed during countless

inerting and disassembling operations on ordnance ranging from the mid-

1800s to the complex guided missile systems of today

Whether used as a text book outline for a formal course, or as a stand-alone methodology for identifying unknown ordnance, this book will not disappoint. I highly recommend it as a valuable tool for public safety agencies or small departments who may not have access to dedicated explosive ordnance disposal resources.