Pragmatic Variation in Service Encounter Interactions across the Spanish-Speaking World 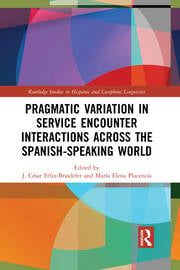 Pragmatic Variation in Service Encounter Interactions across the Spanish-Speaking World

Pragmatic Variation in Service Encounter Interactions across the Spanish-Speaking World expands the study of service encounter interactions into new face-to-face and digital contexts and new (sub)varieties of Spanish.

The chapters examine pragmatic variation in a range of contexts, representing ten countries and twelve (sub)varieties of Spanish. Part I explores macrosocial factors such as region, gender, age, and social class, while Part II focuses on microsocial and situational factors. Part III concludes the volume with theoretical and methodological contributions to the field.

This volume will be of particular interest to advanced students and researchers of Spanish and Linguistics.

Part I: Pragmatic variation according to macrosocial factors

2. Corner-store interactions in Cartagena and Bucaramanga: A variational pragmatics study

4. Gender variation in address form selection in corner-store interactions in a Nicaraguan community

5. Gender variation in the perception of appropriate behavior in hotel service encounters in Spain

6. The role of gender in Mexican e-service encounters

7. Forms of address and gender in Costa Rican service encounters

8. Pragmatic variation by age in women’s use of post-refusal small talk during service encounters in Rosario, Uruguay

9. Verbal humor and age in cafes and bars in Seville, Spain

10. Socioeconomic variation and conflict in Spanish retailer-consumer interactions on Facebook

Part II: Pragmatic variation according to microsocial and situational factors

11. Interpersonal work in service encounters in Mercado Libre Argentina: A comparison between buyer and vendor patterns across two market domains

12. The effects of social distance in service encounters in Puerto Rican panaderías

J. César Félix-Brasdefer is Professor of Linguistics and Spanish at Indiana University, USA.

is Reader in Spanish Linguistics at Birkbeck, University of London, UK.