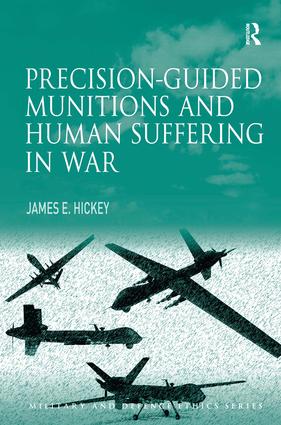 James Hickey proceeds from the premise that throughout history, humans have demonstrated a proclivity for using violence against one another as a means to achieve an end, means enabled, in many respects, by the technologies available at the time. Advancing technology has often been a prime enabler of ever-increasing levels of violence and attendant human suffering. At a few junctures in history, however, certain technologies have seemingly provided the armed forces that possess them the ability to fight wars with decreasing levels of violence and suffering. Today, precision-guided munitions (PGMs) with their high degree of discrimination and accuracy again hold such promise. This book seeks to answer the question: Do PGMs mitigate suffering in war, and have these weapons changed the way decisions regarding war and peace have been made? Answering this question helps us understand possible shifts in emphasis in modern warfare, both in terms of methods employed and of the greater concern placed on limiting human suffering during conflict. This book will help students of ethics, just war and military history and senior military and civilian leaders to understand the possible outcomes and wider implications of their strategic choices to use such technology.

'Modern war technologies, such as smart bombs, promise to reduce unnecessary suffering-but has that really been the case? Answering that question is critical for current debates, such as the ethics of deploying military robots for targeted strikes. In this book, Professor Hickey masterfully connects the dots between military history and philosophy, using real-world data to support his ethical arguments.' Patrick Lin, California Polytechnic State University, USA 'A meticulous examination of modern day precision weapons, their use, and the resulting effects on the target, this book provides extensive analysis on the strategic, operational, and tactical order of effects on not only national policy, but also the philosophical underpinnings concerning the employment of precision-guided weapons versus more destructive weapons.' Lieutenant Colonel Albert F. Priselac II, USAR, US Special Operations Command, MacDill AFB, USA 'Technology has always been part of warfare, but it has not resulted uniformly in diminishing the frequency of conflict or the amount of human suffering in war. In an era of increased reliance on complex and controversial weapons systems, the author provides a valuable historical and ethical framework for thinking about precision-guided munitions as well as the means and meaning of war, today and tomorrow.' Timothy J. Demy, U.S. Naval War College, USA 'The development and deployment of weapons […] makes Precision-guided Munitions and Human Suffering in War essential reading for all interested in the consequences of warfare and the need to control it. The book will be of interest to students of ethics, just war and military history, as well as those interested in international politics and international relations. It should be read by military and civilian leaders. Unfortunately, probably only a very few will take the trouble to do so.' Medicine, Conflict and Survival

James E. Hickey is a Director at the College of Distance Education, US Naval War College, Newport, USA.