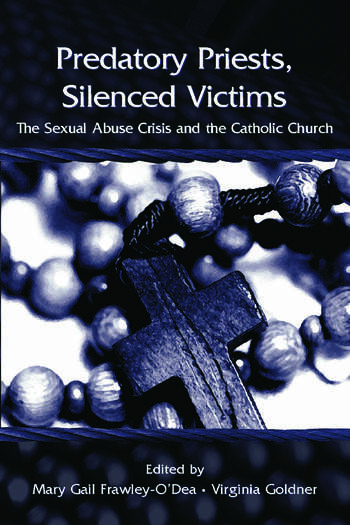 The sexual abuse scandal in the Catholic Church captured headlines and mobilized public outrage in January 2002. But much of the commentary that immediately followed was reductionistic, focusing on single "causes" of clerical abuse such as mandatory celibacy, homosexuality, sexual repressiveness or sexual permissiveness, anti-Catholicism, and a decadent secular culture.

Predatory Priests, Silenced Victims: The Sexual Abuse Crisis and the Catholic Church, a collection of groundbreaking articles edited by Mary Gail Frawley-O'Dea and Virginia Goldner, eschews such one-size-fits-all theorizing. In its place, the abuse situation is explored in all its troubling complexity, as contributors take into account the experiences, respectively, of the victim/survivor, the abuser/perpetrator, and the bystander (whether family member, professional/clergy, or the community at large). Setting polemics to the side, Predatory Priests, Silenced Victims provides a sober and sobering analysis of the interlacing historical, doctrinal, and psychological issues that came together in the sexual abuse scandal. It is mandatory reading for all who seek thoughtful, informed commentary on a crisis long in the making and yet to be resolved.

Mary Gail Frawley-O’Dea, Ph.D., is Co-Director Emeritus, Manhattan Institute for Psychoanalysis, and Executive Director of their Trauma Treatment Center; co-author of Treating the Adult Survivor of Childhood Sexual Abuse and The Supervisory Relationship; and author of Perversion of Power and Sexual Scandal in the Catholic Church. She was a speaker at the United States Conference of Catholic Bishops, 2002 Spring Meeting, and at the 2002 Annual Assembly of the Conference of Major Superiors of Men, and is a member of the Committee on Clergy Sexual Misconduct for the Episcopal Diocese of North Carolina. She is in private practice in Charlotte, North Carolina.

"Frawley-O'Dea and Goldner have assembled an impressive chorus of interdisciplinary voices in this informative symphony about the clergy sexual abuse.  They have brought psychoanalysts, priests, novelists, and social activists together to forge a multi-faceted perspective on this tragic situation.  Themes of betrayed trust, sexualized power, covered-up misconduct, and scarred faith occupy the center stage here but we also encounter tales of resilience, survival, and recovery.  Far from moralistic finger pointing, this clinically and socially wise collection of essays is deeply humane at its core!"

"Frawley-O'Dea and Goldner have compiled a compelling series of articles that address questions relating to many aspects of the sexual abuse crisis in the Catholic Church.  Chagrined, people in and out of the Church have tried to hold in mind the lasting traumatic effects on victims, the shock of comprehending how extensive the abuse was and the greater shock of learning how complicit the Church had been in protecting itself and its priests rather than those who had suffered, and the puzzlement of what, institutionally and psychologically, underpinned such pervasive misconduct. Recognizing that psychological, social, and institutional factors all contributed and paying particular attention to the clinical effects on victims, this volume does the therapeutic, clerical, and lay communities a great service."

"Predatory Priests, Silenced Victims: The Sexual Abuse Crisis and the Catholic Church provides a rich compendium of information for the reader based on the latest available data on the topic. It is a comprehensive and multifaceted work that provides no pat answers to the complicated issues involved in the tragedy of priest abuse. The editors have sought out a diverse group of authors to approach the topic from a wide variety of individual, professional, spiritual, and organizational perspectives. Each chapter is unique and thought-provoking; together, they describe a number of factors that contributed to the crisis of priest abuse and its coverup at the highest levels of the Church. Must reading for anyone touched by priest abuse."

"Ultimately, Predatory Priests, Silenced Victims does not pigeonhole itself to a single 'root' cause of clerical sexual abuse, but rather scrutinizes the severe problem from all angles in the search for a better means to prevent future victimizations.  Highly recommended."

"This book is more balanced than its title, Predatory Priests, Silenced Victims, implies.  Several of the articles are unabashedly critical of the church hierarchy's silence and their efforts to hold 'homosexuality' responsible for the current crisis.  But most of the writers seek to understand, rather than blame, those clergy who perpetrated these crimes and the dynamics of families and religious institutions that provide an environment that sustained them. This book will be of great benefit to anyone who wants to gain insight into the sexual abuse crisis: its effect on the victims, on the Catholic Church as an institution, and its broader impact on American religion and society."