Predicting the Unthinkable, Anticipating the Impossible
From the Fall of the Berlin Wall to America in the New Century 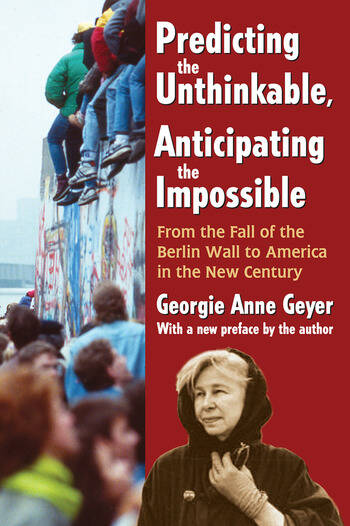 Predicting the Unthinkable, Anticipating the Impossible: From the Fall of the Berlin Wall to America in the New Century

In the 1980s, most Americans scoffed at the idea that the Communist empire could collapse; Georgie Anne Geyer was already outlining that probability. In the 1990s, the world was stunned by wars that raged across post-Yugoslavia; Geyer interviewed top officials and anticipated the conflicts. When 9/11 occurred, she stated, "This was inevitable—the terrorists had already attacked the World Trade Center in 1993 and criminals always return to the scene of the crime."

Geyer argues that while the United States was praised everywhere during an era of "indispensable power" as the "greatest power the world has known," it actually had started on the road to decline. It had won the Cold War, but had immediately embarked upon more Vietnam-like small wars of tremendous cost in Iraq and Afghanistan. Across the board, it was no longer paying its way, while its domestic culture was being vulgarized at every turn.

This book explains how, when, and where these declines happened. Geyer studies the history of nations and of peoples; observes human nature, particularly as influenced by religion and ideology; and is a close analyst of the acts of men and women when they perceive they have been humiliated by others or by history. She warns Americans and journalists that we must anticipate the changes in the world before they are upon us and that we must employ predictions to strengthen our nation and its principles.

Part I: The Expectant Decade
East Germany's Not at All like Its Image, Ron
Berlin Wall is Just One Example of How the World is Split in Two
Soviet Empire Begins to Crack
Groping toward Pluralism
Iranian Children Herded to Death
We Still Can't Go Home Again
Reagan Reforms: His View of Soviets

Part II: The Conceit of Innocence
Poland's Winning Ways with Freedom
Policymakers Ignore New Trends in Terrorism
Yugoslavia: Pulled Back to the Past and Ahead to the Future
Sick with History, Kosovo Awaits Serbs' Final Blow
The Conceit of Innocence II
Who Killed Sir Michael Rose?
U.N. and West Should Quit Playing "Dead Dog" in Bosnia
UN Secretary-General Believes in Negotiating
The United Nations and Neutralism
Russians Slowly Learning New Way
Unclear Indicator of the New Russia
After 1,000 Years of Absolute Faiths, Russia Has None
Russia Needed a New Identity, Not "Shock Therapy"
Kazakh Leader Grapples with Change
In Ironic Reversal, Little Finland Now Influencing Giant Neighbor Russia
Little Norway Goes Where Superpowers Cannot Trend
Holland's "Managed Morality"
The Cold War is Over but the Quest for Meaning Continues
Should U.S. Troops Have Gone on to Baghdad?
Seeking to Change Society by Force?
End of Cold War Released Violent, Separatist Feelings
Many Groups Are Aiding the Breakdown of Nation-States
Sadat's Vision Made a Big Difference
Lessons from the Death of a Cowboy
Post-Cold War World Requires Institution-Building
Foreign Policy Differences of Utopians and Realists
Comandante Chavez Wants to Save Venezuela from "Abyss"
Marine Corps Experience is Applicable Elsewhere
What the Listeners Might Hear in Havana
Democracy is Process, Not Instant Coffee
Shanghai: Full of Life, But Going Where?
Traditional Idea of Truth vs. Designer Truths
Our Foreign Policy toward China is Delusional

Part III: Terrorism an Era unto Itself
Gov. George W. Bush is a Reasonable Reformer
Bush's Faith-Based Program is Far Superior to Welfare State
Putin Arrives
Gulf War Did Not Change Saddam Hussein's Priorities
Religious-Secular Tensions Divide Israel
Clinton Foreign Policy is Devoid of Principle
U.S. Must Preserve What is Left of Our Civic Ideals
Internet Globalizers Can't Erase Cultural Differences
In India the South Points the Way for the North
Information without Context or Knowledge is Meaningless
Afghani Radicals Foment Terror in Far-Flung Places
America is Losing Its Sense of Self
Haiti: Political Terrorism Hangs over Elections

Part V: The Present as Future
The Original Community Organizer Counterinsurgency Doesn't Come
Naturally to U.S. Forces
Crisis Mode Dominates International Conference
One Woman's Journey through the Health Care Jungle
Obama Strategy to End War by Making War
Next Stop: Yemen
Is There a New Revolution Under Way in Iran?
Afghan Morass
Twentieth Anniversary of the Berlin Wall
The Fault is in Ourselves
Iraq War Still a Mistake
Price of Peace in Europe
Google in China
How did We Ever Get to be So Incivil and Vulgar? Without Even Trying?
Radical Young Terrorists aren't So Mysterious After All

Part VI: Out of Time but in Space
Chicago: Life is a Matter of "Becoming"
Vietnam. Then Haiti Today
Pacifist Policies, Appeasing Terrorism
"Axis of Annoyance" Prevails in Latin America
War on the Southern Border
Spreading the Developmental "Gospel"
African Illusions and Realities
Germany's Isolation Collapsed with The Wall
A Trip to Polish Roots
Mothers: The Swing Generation for Women's Rights
New South Africa Shines at the World Cup
America's Little Wars are Draining Us in a Big Way
Summer Home: The Past is No More
Lessons from the Chicago South Side
A Graduate Comes Full Circle