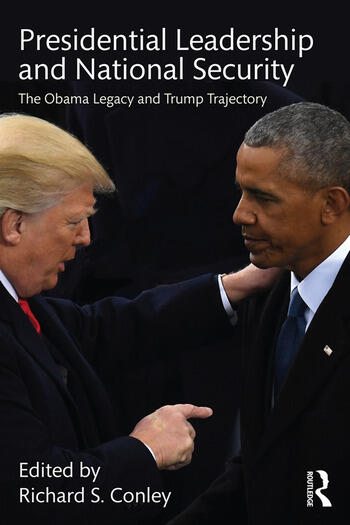 This book assesses the foreign policy legacy of the Obama administration through the lens of national security and leadership. Timely, accessible chapters authored by leading scholars of presidential and international politics cover White House-Cabinet relations; Congress and War Powers; challenges including the Iran nuclear deal, ISIS, and the closing of Guantanamo Bay; drone strikes; the New Cold War with Russia; and the ways in which the Obama foreign policy legacy shaped the 2016 presidential election. In particular, the book explores the philosophical basis of counter-terrorism strategy in the Obama administration and traces how precepts differed from the administration of George W. Bush. More generally, the book contributes to an understanding of the distinctive interplay between the formal, constitutional powers of the president and the use of informal, executive powers in the quest for peace and security. Finally, the book surveys the challenges that Donald J. Trump faces in the transition to the new presidential administration.

5. Attack of the Drones: Due Process and the Constitutionality of Drone Strikes, David Bridge and Jordan Cash

8. U.S.-Russia Relations during the Obama Era:  From ‘Reset’ to a New Cold War, M. Leann Brown

10. The Clash of Civilizations and the Clash of Candidates: The 2016 Election and Beyond, Richard Conley

Richard S. Conley is Associate Professor of Political Science at the University of Florida. A scholar of the presidency and comparative executives and legislatures, he has authored or edited 11 books in print or in press, and 30 journal articles on American and comparative politics.

With contributions by an impressive group of scholars, Richard Conley’s book offers a well-balanced approach to covering presidential leadership on national security policy. It details the central national security issues faced by the Obama Administration and lays the foundation for understanding the successes and failures the Trump Administration will have on foreign policy.

Richard Conley’s Presidential Leadership and National Security Policy is a timely critical evaluation of President Obama’s administration and an analysis of the major international challenges facing President Trump. Nine top presidential scholars cover a variety of topics including presidential-congressional relations and foreign policy, presidential-cabinet relations, the successes and failures of Obama’s national security policy, the president’s constitutional war powers, and the impact of Obama’s legacy on the 2016 election. The book contributes to an in-depth understanding of presidential leadership and the current challenges of national security policy-making.

Presidential Leadership and National Security Policy is a must-read for serious scholars of U.S. foreign policy and presidential leadership. Cutting-edge analyses of phenomena ranging from rhetoric and staffing to drone strikes and unilateral agreements each pair rigorous theoretical development with to-the-moment contemporary analysis. This peerless volume provides an indispensable source to those wanting to understand the roots of national security policy conflicts facing the United States in the Age of Trump.

This comprehensive, judicious, and lucid account of contemporary U.S. foreign policy is an important contribution to the literature. Insightful discussions of Obama's legacy and Trump's surprising early encounter with the world powerfully illuminate the forces of continuity and change shaping Washington's approach to global affairs today. The contributors also highlight the central role of presidential choices in crafting effective policies in the national interest.

Richard Conley and an impressive group of scholars outline and lend perspective to Barack Obama’s national security policy. Each chapter begins its analysis with the situation he inherited from George W. Bush and ends with the first six months of Donald Trump’s administration. If you want to get a broad, critical perspective on the Obama national security legacy, you should read this book.

This seminal volume establishes a usable framework for interpreting President Trump. In succinct, readable chapters remarkably free of academic jargon and partisan rancor, the authors compellingly demonstrate that President Obama’s legacy is a bridge to the Trump administration, and how much they both are appending chapters to a national security playbook that George W. Bush wrote first. This book is an essential guide to change and (a more obvious but largely undocumented) continuity in American foreign policy since September 11, 2001.

, University of Melbourne; Co-author of After Bush: The Case for Continuity in American Foreign Policy

Richard Conley has assembled an impressive group of scholars to address fundamental issues of presidential leadership and national security. The various contributors’ insights and analyses are of uniformly excellent quality, adding up to a consistently strong book.

Each of these essays raises serious questions about America’s constitutional order, which is an especially important subject as the lamplights of democracy flicker alarmingly around the world.