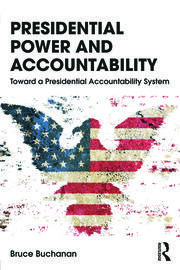 Many analysts now believe that the growth of presidential war power relative to Congress is irreversible. This book was written to contest that view. Its purpose is to identify what would be required to restore presidential war power to constitutional specifications while leaving the president powerful enough to do what is truly necessary in the face of any emergency. Buchanan focuses mainly on diagnosing the origins of the problem and devising practical ways to work toward restoration of the constitutional balance of power between Congress and the president.

The work begins by showing the lack of clear, widely shared standards whose enforcement is needed to sustain the balance of power and draws on the thinking of the founders and political theorists to crystallize such standards. Next it details how, in the absence of standards, agents such as Congress and the Supreme Court with formal influence on presidents and informal agents such as media and public opinion have unwittingly enabled unnecessary power expansion, such as the presidential 'wars of choice'.

Of course change of this magnitude cannot be expected to happen quickly. Remedies necessarily involve a reform architecture intended to unfold gradually, with the first step being simply to start a focused conversation (another purpose of this book). Buchanan moves toward specific remedies by identifying the structure and strategy for a new think tank designed to nudge the political system toward the kind of change the book recommends. Lastly, the book shows how a fictional policy trial could take a practical step toward in rebalancing the war power.

This is a crucial examination of presidential power and the U.S. separation of powers system, with a focused effort on making a course correction toward the kind of power sharing envisioned in the Constitution.

Bruce Buchanan is a professor in the department of government at University of Texas at Austin. He is a scholar of the presidency and a political analyst whose commentary on the presidency and American politics appears in national and international print and broadcast news media. He is the author of numerous books on the presidency concerning how to make the institution both more effective and more democratic.

"In Presidential Power and Accountability, Bruce Buchanan takes on the vexing problem of presidential domination of the war power, and he offers a set of highly innovative and carefully constructed proposals that might help right the constitutional balance. In making the case for his proposed reforms, he deploys a wide range of historical examples along with four compelling, in-depth case studies of four "optional" wars in the second half of the 20th century. His book is thought-provoking, cogently argued, and well written. It will be of interest to professionals and students alike. I highly recommend it."

"Bruce Buchanan provides an insightful and provocative look at presidential powers and explains how presidents, through wars of choice, have exceeded the authority originally granted them by the framers of the Constitution. As a leading scholar in the field of presidential studies, Buchanan gives readers a thought-provoking yet realistic blueprint on how to bring our constitutional system back into its proper balance."

"This book is unique and refreshingly innovative, as well as strongly grounded in history. It makes a clear argument about how the principle of separation of powers has been allowed by its agents to languish, leaving us with little effective accountability over a much-emboldened presidency on issues of the greatest consequence to a nation. It will make you think, and will expand your ideas of what is possible."

"The author captures the contemporary challenges that our American Political System faces in attempting to control presidential actions that lead to furthering the power of the president to wield war power. In this insightful analysis, the author not only provides an engaging discussion of current inter-institutional struggles, but provides a pathway for readers to critically analyze these changes and seek mechanisms to create a more 'Responsible Presidential Model.'"

"Clearly presented, and powerfully argued, Buchanan provides us with a means for overcoming the growth of unaccountable presidential power by encasing the presidency in a redefined and redeveloped "Presidential Accountability System" (PAS) that more closely resembles the intent of the Framers regarding our separation of powers system."