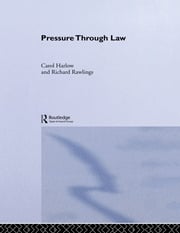 Group litigation has been recognised by political scientists in the States as a useful method of gaining ground and attracting publicity for pressure groups since the turn of the century. In Britain however, recognition that the courts fill such a role has come more slowly. Despite this lack of recognition, pressure through law is far from a modern phenomenon. As the authors show, such cases can be identified in Britain as early as 1749 when abolitionists used the court to test conflicting views of slavery in common law.

This book looks at the extent to which pressure groups in Britain use litigation, presenting a view of the courts as a target for campaigners and a vehicle for campaigning. It begins with a description of the tradition of pressure through law in Britain, tracing the development of a parallel tradition in the United States, which has been influential in shaping current British attitudes.

The authors analyse the significance of the political environment in Britain in test-case strategy. In contrast with America, Britain has no written constitution and no Bill of Rights and its lack of Freedom of Information legislation makes both litigation and the monitoring of its effects very difficult. However, the centralised character of the British government means that the effects of lobbying are rather more visible in the corridors of power.

The authors examine a large number of case studies in order to analyse current practice, and they look at the rapidly changing European and international scene, discussing transnational law, the European community and the Council of Europe. They also look at the campaign tactics of global organisations such as Amnesty and Greenpeace.

Carol Harlow and Richard Rawlings are experienced in public law and familiar with political science literature. They are therefore able to relate legal systems to the political process, in a book designed to be accessible and important to lawyers, to political scientists and to lobby group activists.

`This is a wide-ranging and provocative book...' - Political Studies Vol XLI No.2 June 1993