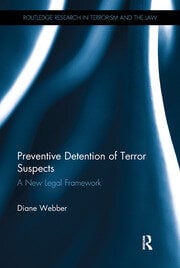 Preventive detention as a counter-terrorism tool is fraught with conceptual and procedural problems and risks of misuse, excess and abuse. Many have debated the inadequacies of the current legal frameworks for detention, and the need for finding the most appropriate legal model to govern detention of terror suspects that might serve as a global paradigm.

This book offers a comprehensive and critical analysis of the detention of terror suspects under domestic criminal law, the law of armed conflict and international human rights law. The book looks comparatively at the law in a number of key jurisdictions including the USA, the UK, Israel, France, India, Australia and Canada and in turn compares this to preventive detention under the law of armed conflict and various human rights treaties. The book demonstrates that the procedures governing the use of preventive detention are deficient in each framework and that these deficiencies often have an adverse and serious impact on the human rights of detainees, thereby delegitimizing the use of preventive detention.

Based on her investigation Diane Webber puts forward a new approach to preventive detention, setting out ten key minimum criteria drawn from international human rights principles and best practices from domestic laws. The minimum criteria are designed to cure the current flaws and deficiencies and provide a base line of guidance for the many countries that choose to use preventive detention, in a way that both respects human rights and maintains security.

Diane Webber is a British solicitor who earned her doctorate at Georgetown University Law Center in Washington D.C. She has worked in London in private practice, focusing on criminal law (particularly white collar fraud), employment and discrimination law, and sports and entertainment law.

"Preventive detention has become a critical tool – albeit a controversial one-- in the fight against terrorism. In this well-researched and well-timed book, Diane Webber makes a significant contribution, both as a reference work and as a prescriptive one. She provides an insightful analysis of detainee policies of multiple countries that have been forced to address the ugly realities accompanying the threat of terrorist attacks. Moreover, she presents tangible solutions to the shortcomings she sees within legal frameworks, both domestic and international, that governments rely upon when detaining suspected terrorists. Legal scholars, policy makers, and journalists all could benefit by consulting this well-articulated and well-argued work." - Kenneth R. Weinstein, Chief Executive Officer, Hudson Institute, Washington D.C., USA

"As the threat of terrorism spreads, and governments increasingly turn to preventive detention in response, Diane Webber’s thorough and perceptive comparative analysis will be an essential guide, both to how nations have used—and abused—this power, and to how they should be guided in the future." - David Cole, Professor, Georgetown University Law Center, USA and author of 'Enemy Aliens: Double Standards and Constitutional Freedoms in the War on Terrorism' and 'Less Safe, Less Free: Why America Is Losing the War on Terror'

"This timely book makes a significant contribution to the national security conversation and should be read by anyone involved in developing counter-terrorism laws and policies." - Mark Dubowitz, International Sanctions Expert and Executive Director, Foundation for Defense of Democracies, USA

"Diane Webber’s rich and precise research provides a comprehensive, current assessment of preventive detention, one of the most important, controversial, and legally complex modern tools in the campaign against terrorism.  Her painstaking analysis probes the diverse national practices of the leading countries, and critically appraises them against the standards of human rights treaties and the law of armed conflict. She organizes that diverse array of state behavior in a highly logical and accessible fashion, and offers original recommendations that are both practical and effective. This book will be of great interest to practitioners, scholars and the general public interested in acquiring thorough insights into this urgent and diverse set of state behaviors – it could not be more timely or more important." - Professor David A. Koplow, Co-Director of the Center on National Security and the Law, Georgetown University Law Center, USA