Principles of Health and Safety at Work 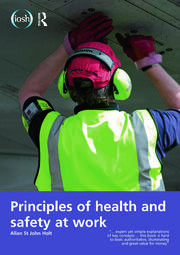 Principles of Health and Safety at Work

The book is designed as a concise, accessible introduction to health and safety basics and includes revision notes and a wide range of references. It is a first class resource for NEBOSH Certificate students.

Allan St John Holt was one of Britain's best-known safety experts. He lectured widely in the USA, Canada, the Asia-Pacific region and Australia on health and safety matters. He was twice president of IOSH, a Chartered Fellow of the Institution and a Chartered Safety and Health Practitioner. Allan founded the profession's examining body, NEBOSH, in 1979.

After establishing and later becoming the non-executive chairman of Hascom Network Ltd, he became global director of environment, health and safety for Bovis Lend Lease. He was subsequently head of health and safety at Royal Mail Group.

An Ambassador of Veterans of Safety International, he was inducted into the Safety and Health Hall of Fame International in 1997 and in 2000 received the Distinguished Service to Safety Award of the US National Safety Council. In 1991 he was elected honorary president of the Southampton Occupational Safety Association. He died in 2007.

Together Jim and Allan wrote Health and Safety in Field Archaeology, published by the Federation of Archaeological Managers and Employers.

Jim Allen is a Chartered Fellow of IOSH and a Chartered Safety and Health Practitioner. He is the current vice-chairman and treasurer of IOSH's London Metropolitan Branch Construction Group.

He was elected chairman of the council of the Surrey County Agricultural Society in 2007 and was its honorary safety adviser for nearly 20 years.