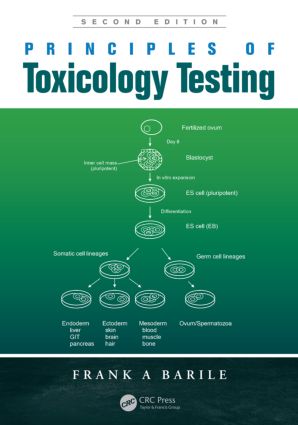 By Frank A Barile

Nationally, toxicology programs have evolved from a traditional exploration of the chemistry and applied toxicity of chemicals and drugs to a more comprehensive study of toxicology and toxicology testing as independent entities. Consequently, the second edition of Principles of Toxicology Testing starts with basic toxicological principles, including absorption, distribution, metabolism, and elimination of toxins, including chemicals and drugs. The book then continues with animal (in vivo) and in vitro toxicology testing methods associated with toxicological analysis and preclinical drug development.

As in the first edition, the book begins with an introduction into the fundamentals of toxicology (Section I) to prepare readers for the subsequent topics and continues through with a discussion of toxicokinetics and human risk assessment. This introductory material is useful in understanding the applications of toxicology testing.

Section II describes the fundamental principles of toxicology testing in animals in greater detail. This section describes acute toxicity studies as well as subchronic and chronic studies performed on animals. Special emphasis is placed on study design and determination of classical indicators for acute and chronic testing, such as the LD50. The book examines other short- and long-term animal toxicity testing methodologies, including dermal, ocular, and reproductive toxicity testing. In addition, mutagenicity and carcinogenicity studies are also discussed in separate chapters.

Section III introduces and discusses in vitro alternatives to animal toxicology tests. This section emphasizes cell culture methodology and cellular methods for acute systemic toxicity, target organ toxicity, and local toxicity. The contributors present the advantages and disadvantages of alternative methods. They also describe the use of high-throughput screening and its applications, the concepts of standardization and validation of in vitro techniques (especially large, organized validation efforts currently supported by US and EU regulatory agencies), and the theories supporting the development of in vitro methodologies.

This second edition is a must-read for undergraduate and graduate toxicology students. Industrial and academic research centers will also find the text useful for establishing a toxicology testing laboratory.

"This book comprises 23 chapters in three sections: basic concepts; testing in vivo; and testing in vitro, laid out in clear typeface with excellent illustrations and diagrams … Culture and test procedures or protocols are clearly laid out in a flow diagram format that seem easy to follow."

Introduction to Principles of Toxicology Testing

Toxicity Testing for Fertility and Reproduction

Carcinogenicity and Mutagenicity Testing in Vivo

Introduction to In Vitro Toxicology Testing

Mutagenicity and Carcinogenicity Testing in Vitro

Reproductive and Teratogenicity Studies in Vitro

Toxicogenomics and Epigentic Testing in Vitro