Process Modeling and Management for Healthcare 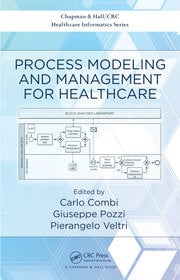 Process Modeling and Management for Healthcare

"[This book] provides a comprehensive overview of the fundamental concepts in healthcare process management as well as some advanced topics in the cutting-edge research of the closely related areas. This book is ideal for graduate students and practitioners who want to build the foundations and develop novel contributions in healthcare process modeling and management."

Process modeling and process management are traversal disciplines which have earned more and more relevance over the last two decades. Several research areas are involved within these disciplines, including database systems, database management, information systems, ERP, operations research, formal languages, and logic. Process Modeling and Management for Healthcare provides the reader with an in-depth analysis of what process modeling and process management techniques can do in healthcare, the major challenges faced, and those challenges remaining to be faced. The book features contributions from leading authors in the field.

The book is structured into two parts. Part one covers fundamentals and basic concepts in healthcare. It explores the architecture of a process management environment, the flexibility of a process model, and the compliance of a process model. It also features a real application domain of patients suffering from age-related macular degeneration.

Part two of the book includes advanced topics from the leading frontiers of scientific research on process management and healthcare. This section of the book covers software metrics to measure features of the process model as a software artifact. It includes process analysis to discover the formal properties of the process model prior to deploying it in real application domains. Abnormal situations and exceptions, as well as temporal clinical guidelines, are also presented in depth Pro.

Pierangelo Veltri is Associate Professor of Bioinformatics and Computer Science at the Medicine and Surgical Science Department, University Magna Graecia of Catanzaro, Catanzaro, Italy. He received the Laurea Degree in Computer Engineering from the University of Calabria in April 1998. He received the Ph.D. degree from the University of Orsay (Paris XI) in 2002. He was researcher with european fellows from 1998 to 2002 at INRIA of Rocquencourt, France working in the Verso Database Group, and contract teacher from 2000 to 2002 at University of Paris XIII, teaching database and programming languages. From 2002 to 2011 was assistant professor at University of Catanzaro, teaching application of computer science in medicine degree. He is currently associate professor at the same University. He teaches Database for computer science and biomedical engineering master students and Advanced database and health informatic systems for biomedical engineering postgraduate students.

His past interests include semistructured and spatial databases. His interests are currently focused on data analytics, proteomics and genomics data management, voice and health related signal analysis, health informatics. He is author/co-author of more than 100 papers published in international conference proceeding, and more than 30 international journal papers. He has been editor of the ACM Sigbio (special interest group on Bioinformatics, Computational Biology and Biomedical Informatics) newsletter since 2013.