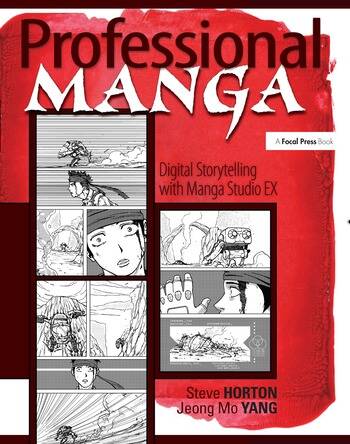 Combine high-end manga storytelling theory and advice with the tools for digital creation in Manga Studio, guided by expert professional manga-ka. You'll discover manga storytelling techniques, from speed lines to technology, from toning to big sound effects. Steve Horton and Jeong Mo Yang then show you how best to accomplish these techniques using the leading manga art creation program, Manga Studio EX. Every ounce of theory is backed up with step-by-step manga illustrations and Manga Studio screenshots that show how these illustrations were created. See the techniques in action in The Other Side of the Tracks, a new manga short story in the book centerfold which demonstrates at least one example from every technique described. You can also follow the continuing story as a webmanga available at comicspace.com.And there's more! The companion CD includes trial version of Manga Studio EX along with high-resolution image files from the book. Smith Micro has also included a coupon for $100 off the full version of Manga Studio EX.

Steve Horton has years of experience writing for and about comics. He co-created the manga Strongarm with Dave Ahn for Image Comics, one of the biggest mainstream comics publishers in North America. He also co-created the long-running webmanga Grounded Angel with Vivi Erlanita at the invitation-only webcomics collective www.graphicsmash.com. Steve also publishes downloadable PDF comic books as Smashout Comics (www.smashout.net) on the free e-book site Wowio (www.wowio.com).
Yang's first recorded manga was created when he was 8 years old. He was one of the winners of Rising Stars of Manga Vol. 5 (Modus Vivendi; publisher: TokyoPop) - and has had the privilege of drawing part of TokyoPop's Star Trek: the Manga. His recent work includes his own manga (Dyoz; Publisher: TokyoPop), which is now being created as an online comic. Yang is also a traditional storyboard artist for commercials, music videos, and TV shows.

"Horton and Ahn deliver great action, crazy technology, and hot girls, but that doesn't cause it to read like some manga fan-fiction. The plot thickens almost as quickly as the action moves, and leaves you with a cliffhanger I dare you to say no to." Tim Demeter, editor, Graphic Smash (www.graphicsmash.com) on Strongarm