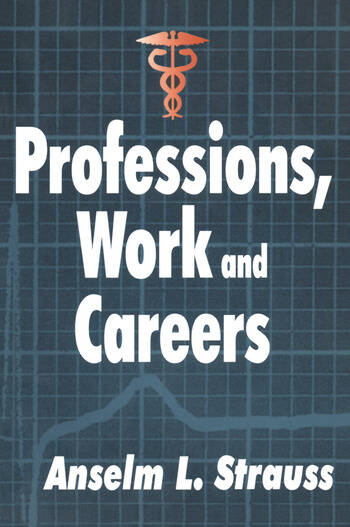 Professions, Work and Careers addresses some of the central themes that preoccupied the eminent sociologist Anselm Strauss. This collection is directed at sociologists concerned with the development of theory and graduate and undergraduate students in the sociology of work and the sociology of medicine. His approach is both thematic and topical.Straus examines organization, profession, career, and work, in addition to related matters such as socialization, occupational identity, social mobility, and professional relationships, all in a social psychological context. Because medicine is considered by many to be the prototype profession, Strauss effectively illustrates many of the points by allusion to nurses, chemists, hospitals, wards, and terminal care. The progression of ideas in these essays are a befitting source for the study of structure, interaction and process, other themes that occupied Strauss in his other research enterprises.As Irving Louis Horowitz noted at the time of Anselm Strauss's death in 1996: "Anselm was and remained a social psychologist of a special sort. He appreciated that what takes place in the privacy of our minds translates into public consequences for the social fabric. His statements on personal problems are invariably followed in quick succession by intensely sociological essays on close awareness, face-to-face interaction, and structured interactions. The subtext distinguishes sociological from psychiatric conventions, seeing everything from daydreams to visions in interactionist frames rather than as pathology. The implications of his explorations into the medical profession are stated gently, but carry deep ramifications, for the act of people treating each other compassionately, not less than professionally, is also an act of awareness. Treating the human person as a creature of dignity, when generalized, becomes the basis for constructing human society."The late Anselm Strauss was a pioneer in bridging the gap between theory and data in sociology. This collection of his works, available in paperback for the first time, will be a valuable resource for professionals and students interested in grounded social theory.Anselm L. Strauss was professor of sociology and chairman of the graduate program in sociology, University of California, San Francisco. He is the author of numerous books including Creating Sociological Awareness and editor of Where Medicine Fails, both published by Transaction.