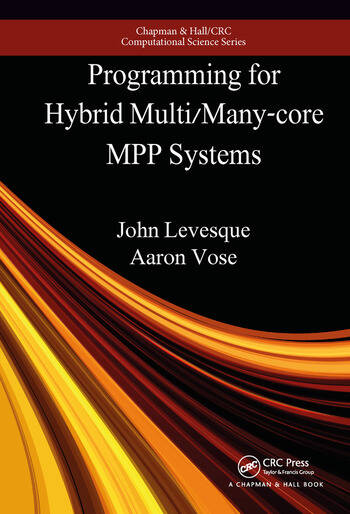 he next decade of computationally intense computing lies with more powerful multi/manycore nodes where processors share a large memory space. These nodes will be the building block for systems that range from a single node workstation up to systems approaching the exaflop regime. The node itself will consist of 10’s to 100’s of MIMD (multiple instruction, multiple data) processing units with SIMD (single instruction, multiple data) parallel instructions. Since a standard, affordable memory architecture will not be able to supply the bandwidth required by these cores, new memory organizations will be introduced. These new node architectures will represent a significant challenge to application developers.

attempts to briefly describe the current state-of-the-art in programming these systems, and proposes an approach for developing a performance-portable application that can effectively utilize all of these systems from a single application. The book starts with a strategy for optimizing an application for multi/manycore architectures. It then looks at the three typical architectures, covering their advantages and disadvantages.

How best to utilize available memory bandwidth and virtualization is covered next, along with hybridization of a program. The last part of the book includes several major applications, and examines future hardware advancements and how the application developer may prepare for those advancements.

John Levesque works in the Chief Technology Office at Cray Inc. where he is responsible for application performance on Cray’s HPC systems. He is also the director of Crays Supercomputing Center of Excellence for the Trinity System installed the end of 2016 at Los Alamos Scientific Laboratory. Prior to Trinity, he was director of the Center of Excellence at the Oak Ridge National Laboratory (ORNL). ORNL installed a 27 Petaflop Cray XK6 system, Titan which was the fastest computer in the world according to the Top500 list in 2012; and a 2.7 Petaflop Cray XT4, Jaguar which was number one in 2009. For the past 50 years, Mr. Levesque has optimized scientific application programs for successful HPC systems. He is an expert in application tuning and compiler analysis of scientific applications. He has written two previous books, on optimization for the Cray 1 in 1989 [20] and on optimization for multi-core MPP systems in 2010 [19].

Aaron Vose is an HPC software engineer who spent two years at Cray’s Supercomputing Center of Excellence at Oak Ridge National Laboratory. Aaron helped domain scientists at ORNL port and optimize scientific software to achieve maximum scalability and performance on world-class, highperformance computing resources, such as the Titan supercomputer. Aaron now works for Cray Inc. as a software engineer helping R&D to design nextgeneration computer systems. Prior to joining Cray, Aaron spent time at the National Institute for Computational Sciences (NICS) as well as the Joint Institute for Computational Sciences (JICS). There, he worked on scaling and porting bioinformatics software to the Kraken supercomputer. Aaron holds a Master’s degree in Computer Science from the University of Tennessee at Knoxville.