Progress in Psychological Science around the World. Volume 1 Neural, Cognitive and Developmental Issues.
Proceedings of the 28th International Congress of Psychology 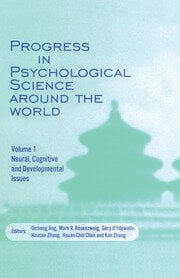 Progress in Psychological Science around the World. Volume 1 Neural, Cognitive and Developmental Issues.: Proceedings of the 28th International Congress of Psychology

Progress in Psychological Science around the World, Volumes 1 and 2, present the main contributions from the 28th International Congress of Psychology, held in Beijing in 2004. These expert contributions include the Nobel laureate address, the Presidential address, and the Keynote and State-of-the-Art lectures. They are written by international leaders in psychology from 25 countries and regions around the world. The authors present a variety of approaches and perspectives that reflect cutting-edge advances in psychological science.

Progress in Psychological Science around the World, with its broad coverage of psychological research and practice, and its highly select group of world renowned authors, will be invaluable for researchers, professionals, teachers, and students in the field of psychology.