Promises, Oaths, and Vows
On the Psychology of Promising 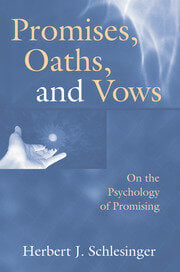 Promises, Oaths, and Vows: On the Psychology of Promising

Considering that getting along in civil society is based on the expectation that (most) people will do what they say they will do, i.e., essentially live up to their explicit or implicit promises, it is amazing that so little scientific attention has been given to the act of promising. A great deal of research has been done on the moral development of children, for example, but not on the child’s ability to make and keep a promise, one of the highest moral achievements. What makes it possible developmentally, cognitively, and emotionally to make a promise in the first place? And on the other hand, what compels one to keep a promise (or vow or threat) when there seems to be no personal advantage in doing so, and even when harm can be predicted? How do we know when a promise is offered seriously to be taken at face value, and how do we understand that another is only a polite gesture, not to be taken seriously?

In Promises, Oaths, and Vows: On the Psychology of Promising, Herbert Schlesinger addresses these questions, drawing on the literature of moral development in children; the psychotherapy of a patient who regularly broke promises that were unnecessary in the first place; those who were regarded as "promising youngsters" who did not fulfill their "promise"; and those who feared making a promise, a commitment, or a threat out of fear that, once made, the utterance would take on a life of its own and could never be taken back. Furthermore, he illustrates his conclusions by examining the widespread use of promising in classical literature, such as Greek drama and the plays of Shakespeare, as well as the motivating and reifying power of the promise in Western religious traditions.

With a style honed over the penning of two previous books, Schlesinger once again produces a work grounded in a firm analytic sensibility, but which also retains the wit and candor of the seasoned analyst. His seminal investigation of this all but neglected topic in the clinical literature is as timely as it is scholarly, and – with the title firmly in mind – Promises, Oaths, and Vows is assured to be a worthy addition to any clinician’s library and a provoking investigation into Nietzsche’s notion of man as "the animal who makes promises."

Herbert J. Schlesinger, Ph.D., is Clinical Professor of Psychology in Psychiatry, College of Physicians and Surgeons, Columbia University, and Supervising Analyst, Columbia University Center for Psychoanalytic Training and Research. He is the author of two previous TAP titles, Endings and Beginnings (2005) and The Texture of Treatment (2003).

"Herbert Schlesinger has long been a psychoanalytic clinician and theoretician whose wisdom has been valued by psychoanalysts everywhere.  As in all of Schlesinger's books, clinical pearls abound.  The psychotherapist or psychoanalyst who spends an afternoon or evening with this slim volume will be richly rewarded.  The clinical wisdom imparted in the pages will pay off in the reader's own practice.  I promise." - Glen O. Gabbard, M.D., American Journal of Psychiatry

"The next time you seek to have an inner dialogue via reading with a professionally experienced, well-read, and wise observer of the human condition, please give Promises, Oaths, and Vows: On the Psychology of Promising and its author a chance. I promise, I vow, and I aver an oath that Schlesinger's book is more than ready to be in the service of the psychology professional and what remains of a well-educated public." - Richard W. Bloom, Ph.D., PsycCRITIQUES

"In this fascinating, clear, wise and informative book by a master psychoanalytic clinician and educator, Herbert Schlesinger fills a gap in the developmental psychology literature regarding the ordinary and important human capacity for morality and trust. Promises, both implicit and explicit, form the basis of human relationships and are a requirement for our psychotherapy work. Dr. Schlesinger enlightens as he informs and can be read not only by psychoanalysts, psychiatrists and other mental health professionals but by all educated seekers of compassionate truth." - Eric Marcus, M.D., Columbia University College of Physicians and Surgeons

"Schlesinger takes the commonplace and everyday acts of making, keeping, and breaking promises, and transforms and broadens them into a comprehensive and complexly nuanced psychoanalytic understanding of the psychology of promising in its multiple variations: ‘primary’ (propitiatory) and ‘secondary’ (morally committed) promising, explicit and implicit promising, etc., all as revealed in everyday life and in everyday psychotherapy, and also as attested in our entire cultural heritage, from the ancient Greek drama, through Shakespeare’s sonnets and plays, and in the oaths, vows, and covenants that mark our religious traditions. A breathtaking enlargement of our psychological vistas." - Robert S. Wallerstein, M.D., Former President, American Psychoanalytic Association (1971-72) and International Psychoanalytical Association (1985-89)

"Herbert Schlesinger has been a prolific contributor to psychoanalytic psychology. With this third book of our new psychoanalytic century, he demonstrates the continuing vitality of traditional psychoanalytic ideas and his own ongoing generative talent."

"This volume reaches beyond the confines of psychoanalysis and psychothearpy to the realms of developmental psychology with special reference to moral development, philosophy, and the social sciences. It should be instructive as well as entertaining for nonclinician, psychoanalytically-informed readers."