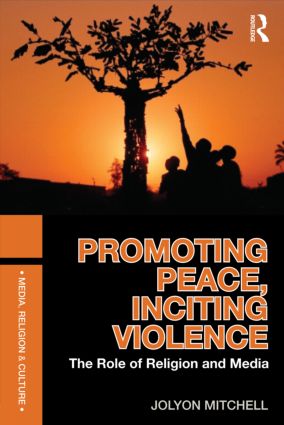 The Role of Religion and Media, 1st Edition

This book explores how media and religion combine to play a role in promoting peace and inciting violence. It analyses a wide range of media - from posters, cartoons and stained glass to websites, radio and film - and draws on diverse examples from around the world, including Iran, Rwanda and South Africa.

"From the world's premier thinker on ethics and popular culture, a historic book on peace-building by religion and media instead of violence and war. This erudite manifesto will become a classic; it sets the agenda for one of the most complicated issues of our perilous times." - Clifford G. Christians, University of Illinois, USA

"Jolyon Mitchell has made a significant and much-needed contribution to the crucially important study of the causes of violent conflict and its nonviolent transformation. In the real world - as opposed to the university - religion, the media, politics and social movements are not divided into neat, disciplinary compartments isolated from one another, but hopelessly intertwined and implicated in the generation or diminution of conflict. Mitchell’s incisive analysis and vivid, evocative illustrations mark a major advance in the interdisciplinary approach necessary to inform the decisions and practices of peacebuilders as well as communicators."

"Scholars have long been perplexed by the capacity of religion to both promote peace and incite violence. Mitchell’s timely study, which examines the power of the media to both change religious practice and move adherents towards peace or violence, gets to the heart of the matter. The book is theoretically informed, alert to history and context, and draws examples from a variety of religious traditions. Lavishly illustrated and written in an engaging manner, this important study is required reading for those seeking to understand the enormous influence of religious media."

"The book itself is a work of art, flexing against traditional scholarly practice of narrowing one’s subject to a particular region, culture, or theoretical perspective in order to embrace what we have more broadly in common as humans: a history of violence and, presumably, the desire to build something productive, progressive, and hopeful from the ashes. If a reader can open themselves fully to the intercultural and interdisciplinary goals, the diversity of texts, and the epic scope of this work, one will find that Mitchell has created a truly fascinating and inspiring piece of scholarship: a work of intellect that is both artistic and activist, a printed example of what a sword refashioned into a ploughshare might look like." - Amber Stamper, Journal of Media, Religion and Digital Culture

"This is a superb contribution to the literature of Peace and Conflict studies… [it] is deftly organized, given the density of the research materials; readable, with more than 50 illustrations… the book would contribute to the reference shelf of any academic library of international media and religion scholars." - Claire Badaracco, Bellarmine University School of Communication, Communication Research Trends

Jolyon Mitchell is Professor of Communications, Arts and Religion and Director of the Centre for Theology and Public Issues at the University of Edinburgh, UK. A former BBC World Service producer and journalist, he has written and lectured widely on issues relating to communications, violence and peacebuilding. His publications include Media Violence and Christian Ethics (2007) and Religion, Media and Culture: A Reader (2011).