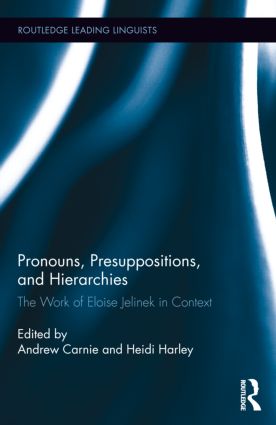 The Work of Eloise Jelinek in Context, 1st Edition

Eloise Jelinek was a leading authority on syntactic and semantic theory, information structure, and several Native American languages (including Lummi, Yaqui, and Navajo). She was one of the very first generative linguists who brought the theoretical implications of the properties of typologically unusual and understudied languages to the forefront of mainstream generative thinking.

Jelinek originated the Pronominal Argument Hypothesis – the idea that many languages restrict realization of their arguments to pronouns. In other work, Jelinek investigated a broad range of morphological, syntactic and semantic phenomena in understudied and endangered languages. Besides the theoretical value of that work, it was instrumental in providing sophisticated semantic and syntactic documentation for such languages, where description is typically limited to the basic morphophonology and morphosyntax, as well as texts, that form the core of most descriptive work.

Thirteen of her most important papers, together with a fourteenth essay previously unpublished, are here collected, each preceded by a short introduction that provides context for the work and evidence of its subsequent influence.

Andrew Carnie is Professor of Linguistics and Dean of the Graduate College at the University of Arizona and works on the syntax of verb initial languages and constituent structure. He has published extensively on the syntax and experimental phonology of Modern Irish and Scottish Gaelic. He and Jelinek developed a close bond over the importance of bringing data from endangered languages to bear on controversies in formal linguistics, and he collaborated with her extensively on the role of hierarchical structure. He is the author of Syntax: A Generative Introduction, Third Edition, The Syntax Workbook, Modern Syntax, Constituent Structure, Second Edition, Irish Nouns, and is the editor of numerous other volumes, including a volume of papers he edited with Eloise Jelinek.

Heidi Harley is Professor of Linguistics at the University of Arizona, working primarily in syntax, morphology and lexical semantics. She has published research on English, Italian, Irish, Icelandic, Japanese and, most importantly for this volume, Hiaki (Yaqui), to which she was introduced by Eloise Jelinek. Dr. Jelinek introduced Harley to Hiaki speaker Maria Leyva in 2001, and showed her the basics of Hiaki grammar, and Harley's work on Hiaki with Mrs Leyva has since become central to her research agenda, funded by two NSF grants and leading to several significant publications. Jelinek's pioneering work has been an important influence throughout Harley's career. She is the author of English Words and the co-editor of two other volumes with Andrew Carnie, including a festschrift for Eloise Jelinek: Formal Approaches to Function in Grammar and Verb First.

The books in this series, Routledge Leading Linguists, draw together some of the seminal essays from the most important linguists of the last decades. Each book covers one scholar, making the best of his or her work readily accessible and available in one place for the first time.