Prostitution in the Community
Attitudes, Action and Resistance 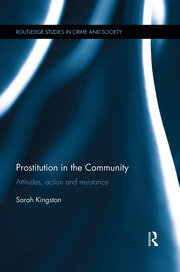 Prostitution in the Community: Attitudes, Action and Resistance

Prostitution often causes significant anxiety for communities. These communities have been known to campaign against its presence in ‘their’ neighbourhoods, seeking the removal of street sex workers and their male clients. Although research and literature has begun to explore prostitution from the standpoint of the community, there is no comprehensive text which brings together some of the current literature in this area. This book aspires to cast light on some of this work by exploring the nature, extent and visibility of prostitution in residential communities and business areas, considering the legal and social context in which it is situated, and the community responses of those who live and work in areas of sex work.

This book is a useful contribution for academics and researchers in the fields of Criminology and Sociology who wish to understand current policy initiatives surrounding the issue of prostitution in local, national and international community settings.

Sarah Kingston is Senior Lecturer in Criminology and Course Leader of the BA (Hons) Criminology degree at Leeds Metropolitan University. Her research interests focus on the sex industry, sexuality and prostitution policy. Her previous publications include New Sociologies of Sex Work (Ashgate, 2010) for which she was co-editor.

"Though sex workers can be among the most vulnerable in society, notions of tolerance and charity rarely extend to encompass them. In this timely book Sarah Kingston explores the tensions that exist between residents and sex workers, suggesting that stereotypes of stigma and deviance can combine to position sex workers and their clients as beyond the bounds of respectable society.

Though grounded in the context of contemporary prostitution policy in the UK, this book is sure to be of international import given the long-standing failure of governments to evolve regulations protecting the interests of landowners and residents without penalising sex workers."

"By examining prostitution from the vantage point of residents affected by the presence of prostitution in their neighborhoods, Sarah Kingston illuminates a dimension of struggles over sex work that has rarely been researched.  A major, unique contribution to the literature on prostitution."

"Policies restricting consensual adult prostitution are often justified in terms of the alleged negative effects on the communities that provide venues for ‘the sex trade’. This book examines the empirical basis for this assumption by accessing and unpacking the complex attitudes to sex workers, their business partners, and clients, formed by those who live and work near them.

"By drawing from her own ethnographic data and the work of other researchers, Kingston offers new ways of studying sex markets that will help public officials and concerned citizens rethink how societies suppress and regulate them."

"This research provides a comprehensive overview of the effects and contradictions that arise on prostitution... The contribution of this book is essential not only for the academic world and for whom are dedicated to the study of security, but also for all agencies involved on prostitution at municipal, state and international levels."